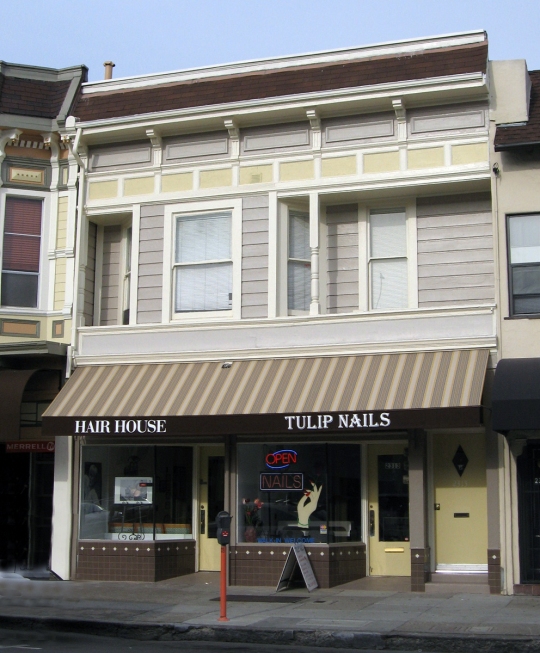 The two-story Queen Anne building at 2313 and 2315 has seen many changes along Santa Clara Avenue since it was constructed. Built by George MacRae for Frank Hally, a grocery store owner, the commercial building originally had a twin next door. Unfortunately, in 1934, the twin underwent Spanish Mediterranean surgery and was no longer.

Alameda’s first commercial district developed along Park Street in the 1880’s. At the turn of the Century, the area had assumed the stature of a proper downtown and Alameda had transformed from a semi-rural community of about 6,000 residents to a suburb of about 20,000. Between 1880 and 1905, downtown had grown to eight blocks along Park Street and the stock of commercial buildings doubled to about 150 structures. Commercial development spread along Santa Clara and several other cross streets which is when Mr. Hally built his grocery store in 1892 for a cost of $2,000.

Concentrations of 19th-century buildings are found in several of Alameda’s business districts, remnants of the boom years in their last decade. Most of the commercial structures from these years have disappeared or been altered like our twin. Although wood construction became less common after fire limits were established in 1894 along Park and Webster Streets, it remained widely used beyond the fire limits through World War II. Approximately two-thirds of the inventoried commercial buildings at the time were constructed of wood like the Hally Building. And like the grocery store, the most common type of commercial building in Alameda then was a two-story structure with commercial uses on the lower floor and residential uses on the second. By 1890, 2-story wood-frame buildings were taking on the attributes of the Queen Anne style. Building facades typically exhibited high parapets, prominent cornices with brackets,  bays on the upper story, and applied wood ornament.

The Hally Building is located among a row of Victorian buildings, many of which have lost their integrity. However, you still get a sense of the Victorian commercial neighborhood as it was at the turn of the Century. The block is now part of the Park Street Historic District, created in 1989, and this particular wood building is a notable example of early, commercial building in Alameda County.

Lucky for us, the Hally Building has been in the same family for decades: Brian Kelly, the building’s current owner, inherited the structure from his father, Vincent Kelly who bought the building in the early 1960s and remodeled the upstairs unit into two separate flats. It’s now owned jointly by Brian and his wife, Susan, and his sister, Joan Winiecke who lives in Oregon.

Continuity of ownership helped preserve the Hally Building’s upper Victorian facade: brackets, panels, a turned post, wood trim, and ship lap wood siding were intact as were the double hung windows. The mansard-like roof parapet and wood balcony are also original. In addition, the original use of the building has not changed. It still has two commercial tenants below and two residential units above. 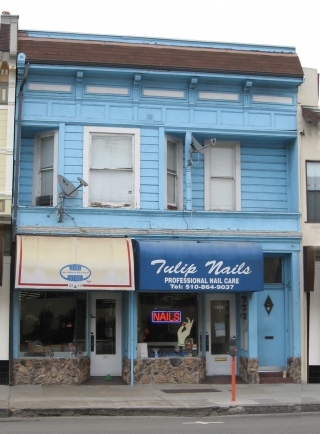 However, by 2008, the entire facade was looking rather tired. Peeling paint, stone siding (which replaced the original wood bulkheads sometime after 1979), and mismatched doors and awnings from bygone tenants graced the old storefront. Joan wanted to spruce the place up a bit, but, alas, the family was short of funds. Susan heard about Alameda’s Façade Grant Program and contacted Sue Russell in the Economic Development Department. Ms. Russell quickly assisted their application to meet deadlines. With a $30,000 grant from the City, the family restored the original elegance to this small commercial structure.

The first step was repainting the façade with four soft tan colors, highlighting the handsome building’s proportions. The bulkhead stonework was replaced with more traditional tile work while one elegant awning replaced two tattered ones and pulled the storefronts together. On the interior, display windows were retiled and all the signage was replaced to improve visibility. Talented Mi’Chelle Fredrick from West End Workshop was the design consultant who worked with the owners and advised on color and material selections while Jason Yung was the builder who pulled it all together with fine craftsmanship.

With just a few simple touches, the old storefront regained much of its lost character and Santa Clara Avenue regained one of its historic commercial buildings. Better still, Susan Kelly notes that all the tenants now take much more pride in their building and the neighbors love the improvements.