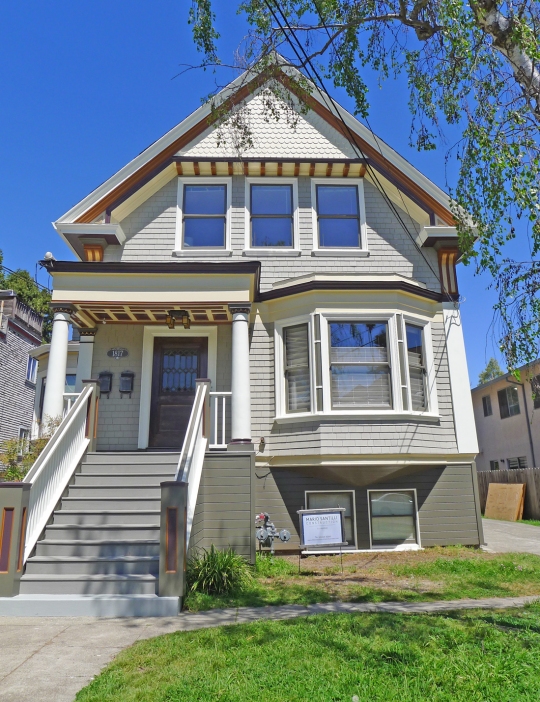 Story by Mark Renner, Lynda Bytof, and Denise Brady
Award Recipients: Linda Bytof & Mark Renner, Owners; Ann Maria Celona, Architect; Pete Raisig, Santilli Construction; Jose Gonzales, Liquid Culture Painting; Color Consultants Judy Goode, Celeste Hutchinson.
Located directly across from “Leonardville”, the owners of this triplex at 1817 San Antonio wanted to emulate the faithfulness to original design that their neighbors exhibited in maintaining that row of Alameda gems built by renowned Alameda builder Joseph A. Leonard. This proved to be challenging because the structure had little historical documentation. The oldest picture anyone had was from the early 1970s, and planning and building records were very sparse.
It was reportedly built in 1895 as a summer home for a “clerk” from San Francisco. During World War II it was converted from a single-family home to a 4-plex and expanded in a haphazard fashion. When the present owners purchased it in 1999, they converted it into a triplex to provide room for their 4-person family. By 2017, what had begun as a project to simply replace all the badly-worn siding shifted more to a work of restoration. Upon closer examination they realized that there was much more damage and deterioration to the crown moldings, trim, sills, window casings and multiple window sashes. After removing the outer layer of shingles, they discovered that another layer of shingles was apparently the original siding, so they elected to re-shingle. 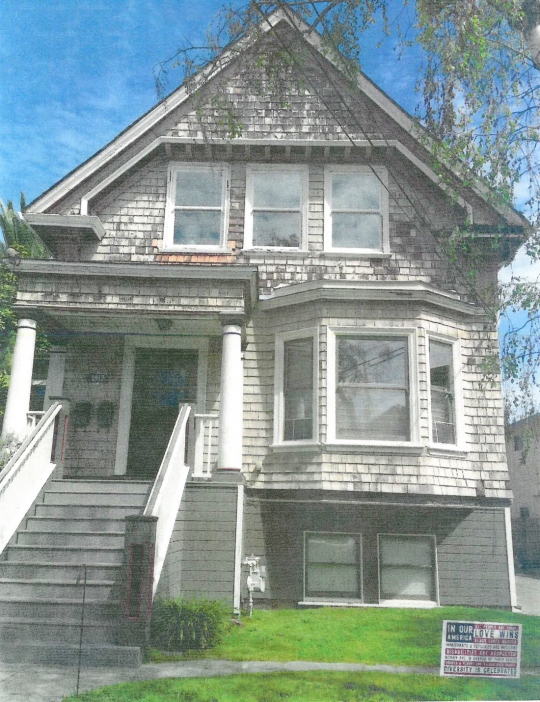 The architect, Ann Maria Celona of Berkeley, had excellent ideas about just a few alterations that would make the style of the house much more expressive and in the style of the period.  The contractor, Santilli Construction, led by Superintendent Pete Raisig, was especially skilled at calling out and restoring the smallest of style details.
Window casings that at some point had been re-done with simple 1 x 6’s were replaced with period crown moldings and casings made from farmed African mahogany that matched the original salvageable moldings. A little more elegant look than those old 1 x 6’s!  The cornices above the porch and bay windows had been a course of patchwork-looking shingles, so they were replaced by layers of horizontal siding. The prominent front corner of the house was a monotonous two stories of shingles, now replaced by a wrap-around Pilaster that replicates the existing columns on the front porch. The result of all these enhancements is a look that is significantly more ornate, trim, and true to the historical style of the period, as well as being considerably more appealing than the patchwork of repair and replacement pieces that served as placeholders for fifty-plus years!
The owners had some hands-on participation in the color design. Judy Goode (since moved to Washington) was the original color consultant, with her work later supplemented by Celeste Hutchinson of Alameda. Since the house has a lot of large surface areas, somewhat muted tones were chosen. Since the original color choices were made several years before this project was conceived, a lot of decisions about placement of the six different colors were made as the construction progressed. To help make those decisions, the owners enlarged a photocopy of the architect’s drawing and painted different color samples on the drawing—a paint by number with no rules. That process turned out to be extremely useful compared to simply trying to visualize the colors to be applied to the various elements.
The execution of the paint job, by Jose Gonzales and Liquid Culture of Berkeley, was carried out with great attention to the decorative architectural elements such as the fluted corbels and the capitals on the Ionic columns. The multi-color scheme for the coffered ceiling above the porch now jumps out with layered, vibrant colors that showcase the wood details which previously had been virtually invisible from the street. The design and construction process progressed into far more than the original concept, but the result hopefully will be a lasting legacy! And now for the earthquake retrofitting!