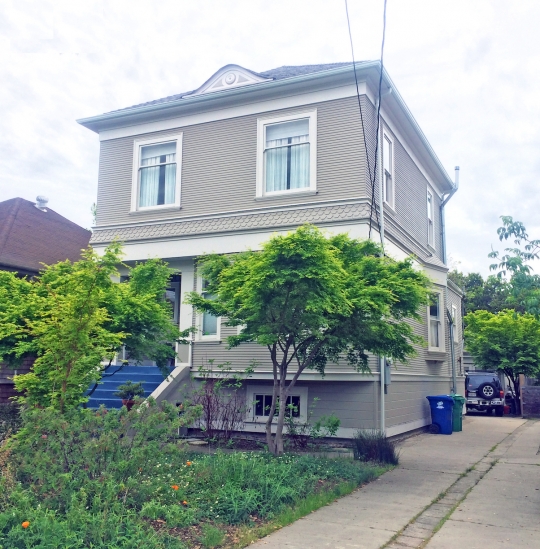 The two story Colonial Revival, three bedroom home at 2134 San Jose was purchased in 2009 by Antonia and Hank Hernandez who spent the next decade restoring it to its original beauty. The date of its origin is estimated at 1899.
The restoration process began with the removal of the painted aluminum siding and then removing a layer of stucco which was uncovered under the aluminum siding. Hauling was a major part of the work of removing the aluminum and stucco, and day labors helped out with this task. Scaffolding from Century Scaffold of San Leandro as well as the owner’s scaffolding was a necessary part of the restoration process. 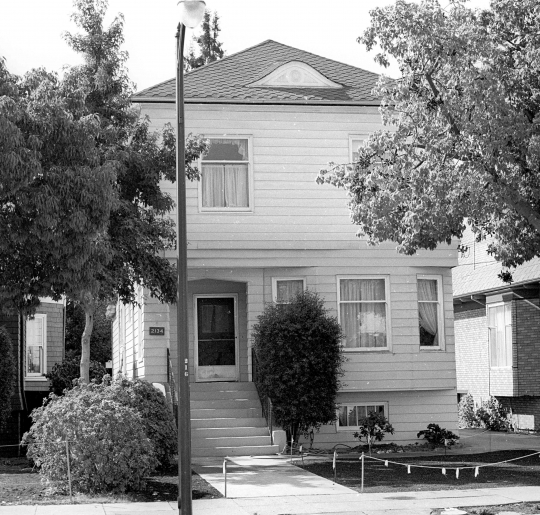 The original brick foundation was removed and used to create a brick patio. Robert Martinez of RMJ Concrete helped with supporting the house and building forms when the foundation was excavated and replaced. Concrete was purchased from Redy Mix in Oakland. Roger’s House Moving was used for the first part of the support work. DC Excavation removed the concrete from the backyard. Chandler Ham Roofing restored the upper roof and gutters. Some of the roofing was done by the owner with supplies from Roofline Supply in Oakland.

Many of the windows have their original glass, but all of the original double hung windows were repaired and replaced and new sashes were added. A good bit of the trim such as the window sills were destroyed when the house was stuccoed requiring the owner to custom mill replacements using redwood harvested from a tree cut down in the backyard. Elite Tree did the removal and Bob’s Tree and Stump assisted with a portable mill built in the backyard. French drains and galvanized and seismic upgrades were added. After removing a large concrete slab in the backyard a landscaped garden was created. Most of the supplies used came from either Home Depot or Economy Lumber or American Emperor. Some special exterior trim came from Beronio of San Francisco.
The owner gives credit to his father, a structural engineer, architect and general contractor from Sonoma to provide much needed advice along the way.

The present owner is now on a search to add a garland swag to a horizontal panel on the facade to replace the original swag decor which over the years suffered wear.