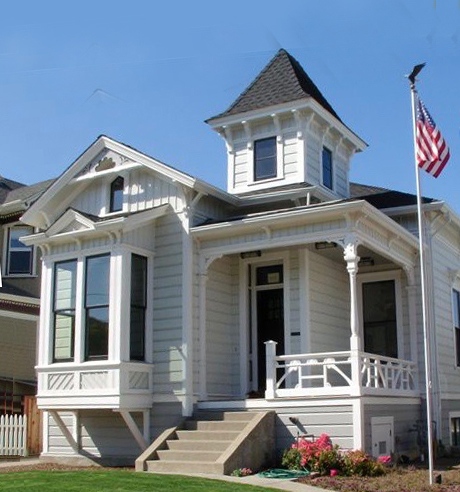 The well-known Alfred Pattiani’s 1883 Miniature Eastlake Villa on San Antonio Avenue — called a “villa” because of its central tower — has been carefully restored inside and out over the course of 13 years by its current owners Maria and Douglas Love.

This Love story began 98 years ago, when Douglas’ great grandfather purchased the unique house as a gift to his daughter’s six children. As his siblings left the nest, Douglas’ uncle John lived in the house until his death in 2004, but after 85 years of continuous residency the house was in a state of total disrepair and in dire need of updating. John’s sister Laurella, the sole remaining heir at the time, couldn’t afford to manage the daunting task and sadly decided to sell it.

That’s when Maria and Douglas, long time Alameda residents, realized that they had to buy the house. “Our children would be the fifth generation of Loves to live in it… it’s the family home, how could we not save it and give it the attention needed? There was much to undo from past upgrades.” Maria explains, “around 1920, at the time of the early renovations, and to ‘modernize’ the house, the front door was changed to a craftsman style, the built-in china cabinet in the dining room was added and the living room was divided in two to create an additional bedroom. Douglas, myself and our kids Mary and John, worked tirelessly on restoring the interior rooms and woodwork, always keeping in mind to stay true to the originals as possible.”
But they needed expert craftsmen and specialists if they wanted to tackle a real restoration that would bring back to life this forgotten family jewel. So they called on Tom Caroll to put in a new foundation and on Haim Ziv from Quality Home Remodeling to be their General Contractor. And because they were adding an attic and a full basement for additional living space, they worked with one of the best and most experienced local architects, Scott Brady, to provide the architectural drawings. 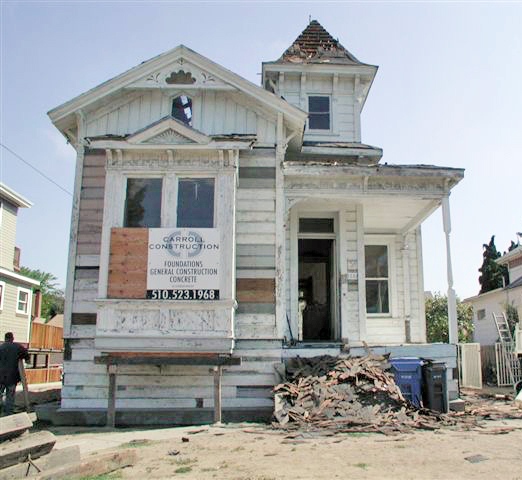 However, for the Loves, the most extensive and rewarding work was restoring the front porch to its original design, and reclaiming a façade with interesting ornaments hidden under the neglect and grime of years past, like the decorative flower-shaped spandrel at the apex of the gable and the small sunburst accenting the bay. “Carpenter Tom Wolter did an amazing job recreating the porch railings from the 1920’s photos saved from uncle John’s belongings. Truly spectacular when you realize that these were an 1883 craftsman’s hand sewn pieces, each one done in an intricate combination of organic shapes not seen in any other house in Alameda.” Other items restored when the railings were removed were the corner column and missing decorative corbels, also custom made to match the originals. The Loves envision to reproduce the roof cresting, also shown in the 1920’s picture, and to eventually replace the front door to an original Eastlake style.

The house is simple, yet beautiful. With a subtle two-toned light-colored palette painted by Steven Rubinstein, the house doesn’t call attention to itself – it has the traditional square bay and board & batten trim of the Eastlake style – except perhaps for its original cupola, accessed from the attic, which unverified stories claim was the bell tower to a one-room school house once located near Lake Merritt in Oakland.
Every inch of the house represents a true labor of love, and seeing it come back to life over the years it has taken to restore and rehabilitate it, has been an amazing life experience that ties the Love family 98 years back to their roots in Alameda.