Story by Brian McDonald
Award Recipients: Robert McLaughlin, Jane Friedrich, and Jill Friedrich, Bright Source Properties; City of Alameda Planning Division.
On December 4, 2017, the home at 2314 Eagle Avenue was severely damaged by fire. Tragically, the owner lost his life. The Colonial Revival house was built in 1907. Until the fire, it had remained visually similar to its original style, through minor revisions in 1933 and 1952, the addition of a laundry room and porch at the back in 1955, and a carport in 1974.
In October, 2018, Bright Source Properties bought the building. Robert McLaughlin, a partner in Bright Source and a contractor specializing in restoration and remodeling of vintage homes, undertook to bring the property back to life. So much of the frame had to be replaced that it was initially in question whether the building could be restored or would have to be torn down and rebuilt. 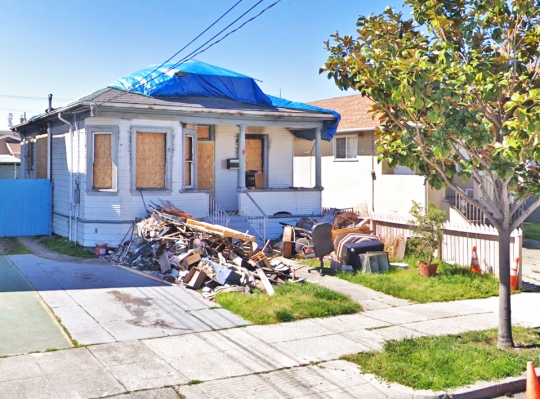 The first step involved removal of the roof. Here, the contractor got a bit of a surprise. Some of the previous changes had involved adding new roofing without removing the old. There were four full layers of roofing material which had to be carefully removed. The combined weight was enough that the workers had to do all the roof removal from below, not daring to stand on the roof.
In order to enlarge the attic, Mr. McLaughlin changed the hip roof at the rear of the house to a gable roof. He was able to save the eave material at the front and sides, and to match the existing shingles from the roof. He also matched the truss height between the top of the walls and the edges of the roof.  Century Roof and Solar produced distinctive scalloped gutters. The center girder was irretrievably damaged and had to be replaced, as
did 60% of the floor joists.
In the course of the reconstruction, they essentially reversed the floor plan. Prior to the fire, the bedrooms had been on the east side of the home, to the left as one entered. The living and dining room and kitchen were to the right. After taking out almost all of the interior walls, they put the bedrooms on the right side, and added a second bath.
The contractor was able to re-use the elegant existing dormer window at the front of the house. This was one of the areas where the city planning department, especially planner Henry Dong, deserves kudos for their involvement in helping the builder stay true to the original design and re-use materials. All the existing frames and jambs from the front windows were saved and re-used, as were the exterior trim and crown on the eaves at the front of the house. With this much original detailing available, they were able to have authentic reproductions milled for the parts of the house which had been completely destroyed. Everything had to be custom made because size standards had changed over the decades; it was possible to find off-the-shelf design elements in the same styles as the original but not the same sizes.
The most difficult element to reproduce was the braces below the lower sill on the exterior windows. They were a very odd shape. Eventually, Mr. McLaughlin found a cedar hand rail that matched the curve when he quartered it with a table saw. Because of the age of the house and the lack of prior major remodeling, all parts except the added laundry room had classic square nails.One of the last steps was to demolish five old sheds which were collapsing on their own in the back yard. Zoning would permit the addition of an additional dwelling unit in the back, and that may be considered in the future.
Jill Friedrich, another partner in Bright Source, was responsible for the period-authentic color scheme outside and in. Because she, her mother Jane Friedrich, and Mr. McLaughlin were the owners as well as the design team, and because Mr. McLaughlin’s company worked mostly without subcontractors, the entire project was
completed in about three months.
After the house was rebuilt, it was purchased by Paul and Jessica Scholz. They are living in it today, and love the home. To quote them, “They made it so functional and livable. They took everything into consideration; woodwork, paint, and all the little details. We are elated that we can call this home”.