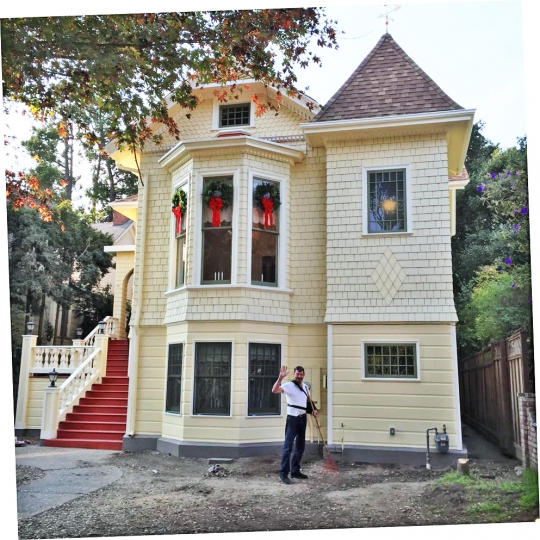 In 2016, when Dougal and Kim Brinkley bought their home at 1003 Morton Street, “eclectic” would be an understatement in describing the architectural mix caused by over 120 years of renovations.

The home was originally built, probably in the 1880s, as a one story Italianate cottage near the corner of Alameda Avenue and Paru Street. In 1890, it was moved to its present location and it is thought that some Queen Anne style decorative features were added to the Italianate façade. After a detached garage was constructed in 1929, the thirties saw substantial change. A couple of rooms were added on the main level, and the stereotypically Alamedan high crawl space was converted into several units (not connected to the main level at that time).

The biggest changes, both exterior and interior, came in the 1970s; reversing these alterations formed the basis of most of the post-1916 restoration. Two more rooms were added at the rear; their style, with polished wood walls, a very large brick fireplace, almost a full wall of glass at the back, and curved ceilings, was described by Mr. Brinkley as Tahoe Ski Chalet. In an apparent attempt to tie the new rooms to the old, Mediterranean tile was laid on the floors of much of both areas. An interior staircase was added to bring the 1930s basement fully into the living space.
At roughly the same time, the entry door was moved from the north side of the building to the south. The new entrance faced the street but was around the corner, recessed from the main front wall. A staircase, largely hidden by a wall, turned twice to take residents or visitors to that side. The new entrance enabled the conversion of the former front porch, entrance hall, and parlor into a master bedroom and bath. Besides the many modernistic sliding windows added as a result of the interior changes, the most conspicuous exterior change at that time was covering the entire front and side exposures with brown shingles, covering or replacing various shiplap, fish scale shingles, and other original design elements. 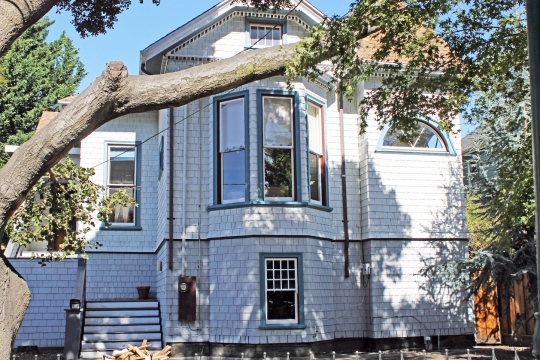 In the 1990s, the then owner painted the brown shingles blue-gray, with blue, maroon and white trim. When the Brinkleys bought the house in 2016, they wanted to restore the exterior to its former glory while incorporating some of the changes from the intervening years. They worked with Angela Klein Architecture to create a design which honored the original Victorian house while removing many of the non-conforming elements. Among the visually conspicuous exterior elements are the 17 new windows. Seven replaced existing 70s windows with more appropriate styles, while the other ten were added in new spots. In addition, some existing windows had new trim elements both outside and inside.

They restored the original shiplap siding, and replaced the rustic shingles on the upper front wall with fish scale shingles like the ones the house had from 1890 to the 1970s. The entire exterior was painted a restful shade of yellow, with subtle accents. The front door had been a plain blank piece of wood at least since the 1970s remodeling; they had a new period appropriate door carved and installed. They also moved the electric meter and utility lines to be less conspicuous and more integrated.

Inside, they replaced the tile floors with wood. They added crown molding and more elegant baseboards, and replaced some of the wooden paneling with sheetrock. The resulting walls are painted off white, while the new window frames and moldings are a brighter white. The master suite added in the 70s was expanded, and the downstairs area added in that same era was changed and modernized.

Before any of these changes happened, the house’s structure had to be updated. Jameson Construction replaced the brick foundation and wooden basement floor with concrete foundation and slabs. They also rebuilt some of the load-bearing downstairs walls.

Beilman Construction translated the visions of the owners and of Angela Klein into physical reality. Painter Joe Simon was initially skeptical about the yellow color that Kim Brinkley and Angela Klein picked for the exterior, but he did a great job of restoring the exterior to its former glory, and using light colored tones to bring both light and a more traditional look to much of the interior. Joe Simon Painting, Pacific Electric, and TEC Electric also did great work in upgrading and modernizing the utilities.