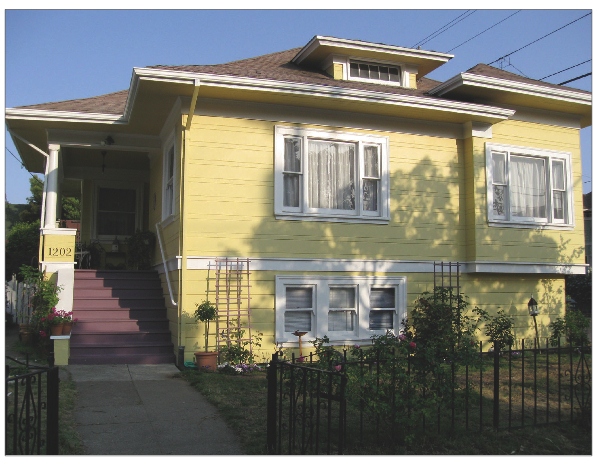 Hit by a Hurricane

One afternoon, next-door neighbor Nancy Ryan, whose own house had recently been stripped of asphalt & stucco, came over and asked Dan, “Aren’t you curious about what is beneath the aluminum siding?” Within minutes both of them had crowbars and the answer to the question. Yes, they found original redwood siding. Pam returned home to an unexpected surprise. That is how the exterior renovation of their 1906 Colonial Revival home started. Whereas they had hoped to eventually remove the aluminum and stone veneer, they were not thinking that this was quite the time to do it. In fact, they were only planning to paint the exterior.

Encouraged by their neighbors Nancy & Jim Ryan and other friends, they decided to go for it. Originally they considered doing the work themselves, but soon dis- covered it would be way too much for them to tackle. They hired the Ryan’s contractor Tom Carroll for the job. A few days after the project started Dan returned home one evening to find his home looking like it had been ‘hit by a hurricane.’ There were pieces of twisted metal hanging off the house and laying on the ground, as well as gaping holes in the sides of the house. The stone veneer was full thickness and required jackhammering to remove it. 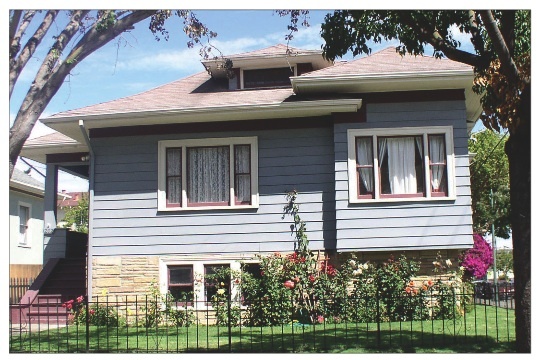 Once the aluminum siding and stone veneer were removed, there was a fair amount of work to be done before painting. Termite damaged boards had to be replaced. The right rear addition needed to have new siding made to match the old and there were other numerous gaps to fill. This presented an opportunity to install shear panels to the ground floor, which was done from the exterior. Thinking it would only be a few days before the new siding would be installed, Pam gave kids Nathan and Natalie the go ahead to paint graffiti on the plywood panels. “Well, it was up a little longer than we expected.”

Dan describes the process as ‘dirty, dusty and noisy.’ All in all it only took about three months. Pam points out that it really was relatively painless because all of the work was done outside. There were also some unexpected benefits to the project. The bothersome ant problem that they had fought suddenly disappeared, as the ants had been living beneath the aluminum. Also, there had been occasional rats living in the attic. Once the siding was removed and large openings exposed, raccoons moved in to the attic and chased away the rats. Next, vector control removed the raccoons and the house is now vermin-free.

The overall transformation was gratifying and they are pleased that it happened sooner than later. The house went from dull and dreary to bright and beautiful. Some people might have noticed the pirate ship in the front yard. Since the house was a ‘wreck’ for a while, it seemed to fit right in. Now that the renovation is complete, the pirate ship is going away. Pam is especially happy to finally get the chance to create the garden she has been waiting for.