The Queen Anne Residence built by H.M. Allen in 1891 at 1432 Benton Street has been rejuvenated after years of asbestos, stucco and aluminum siding followed by years of scaffold cladding. When Charles Kahler and Kristen Harber bought the home eighteen years ago, it had been reconfigured into a duplex and looked like a grain silo.

First, Charles and Kristen converted the structure back to a single family home and spent years working on the inside repairing structural decay and updating electrical, heating and plumbing systems. Charles dug out the basement with a spade – a labor Kristen rewarded him with a “little gold shovel award”. The foundation consisted of a few layers of brick topped with rotting wood boards. Working section by section, the house was supported with beams throughout the foundation and fireplace footing replacement. Concern for earthquake damage also led them to bolt the house to the new foundation. The bricks were used to create a walkway to the front steps. Conveniently, they quickly became covered with moss and look like they have been in their current location since 1891. 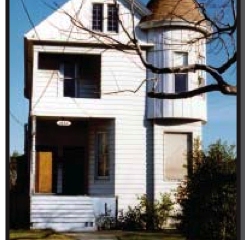 As work moved to the exterior of the home, the first project was to install a portico. Charles bought the entrance structure from a Marcuse and Remmel home that had burned down on Santa Clara.  A she install edit, he had to remove the aluminum siding and saw shingles appear. Section by section, aluminum was removed. Charles framed the portico with salvaged vertical columns modified to fit. He says, “ the aluminum siding gave him some license for creativity to slightly embellish on the original design.” With this in mind, he topped the portico with a small gable, as was installed on the house on Santa Clara. Railings, balusters and a wrought iron fence were purchased from salvage companies, antique stores, garage sales and Victoriana. This became expensive so the basement became a wood working shop and Charles started turning wood to make his own banisters, spindles, shingles and brackets. Over 200 brackets were made from Charles’s brother’s former redwood deck. Charles used the ghost markings to determine the proper size of the brackets. Some of the shingles were originally fish scales and some of a more geometric design. These were matched and replaced using the original patterns.

The column on the second story porch had been boxed in and the top gable presented a real challenge. Nails held the aluminum siding into stucco so Charles designed a triangular piece to install over the existing mistreatment. The window in the turret was flush to the turret’s surface. Charles wanted a sill and rather than just adding shingles, he made a form and steamed wood so it would curve.

The windows of the home are still a work in progress. When the house was a duplex, a second apartment front door existed. It was replaced with a leaded glass piece big enough to fit the space. Leaded glass was placed in the basement windows on the sides of the house. Charles and Kristen plan to replace the front and side windows under the turret perhaps with beveled glass. They are thinking of replacing the dining room window with stained glass.