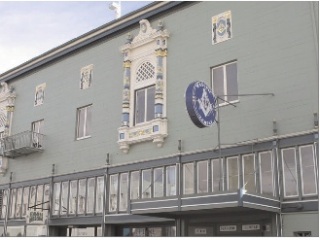 In 1926, the finishing touches were made to the new Alameda Masonic Temple, the first of two planned identical structures to replace the smaller, old Masonic Temple on Park Street. The second structure was never built due to lack of space needs and the planned demolition of the old temple was dropped in favor of selling the building. 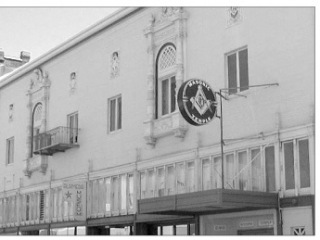 The new Alameda Masonic Temple is a steel-framed building. After plaster began to fall from the ornate upper story reliefs in 2005, repairs were started to stabilize the columns/cast ornament designs cladding the exterior facing Alameda Avenue. Over the years, cracks had formed in the plaster and water froze in the columns during winter seasons causing expansion of the plaster. After opening the columns, the wire mesh structural base material was found to remain in good condition so the re-plastering and repair was easily accomplished. Wooden windows were replaced with new wooden windows.

Admirers of the building, Cornelia and Eric Grunseth of Pacific Northwest Painters had long dreamed of taking part in restoration of the plaster and painting of the Masonic Temple. Cornelia, also known as “The Color Lady”, had long fantasized the color scheme she wanted to use to emphasize the building’s design. The blue and green tiles at the bottom of the building’s bulkheads inspired the colors. Their work included power washing, scraping and sanding the plaster prior to repairing the cracks. Starting with the windows and trim, then advancing to the columns, color and gold leaf were added to bring out the personality of the building. As the project progressed, additional design elements were emphasized including the four plaques that symbolize the four Cardinal Masonic Virtues – Temperance, Fortitude, Prudence and Justice. 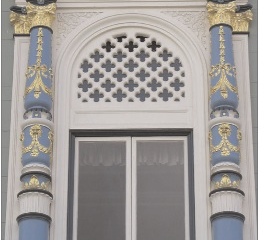 Cornelia says, “We could have kept adding more, but have decided that what we have done is enough for now”. She is amazed at how many people have told her they never even noticed the building before.