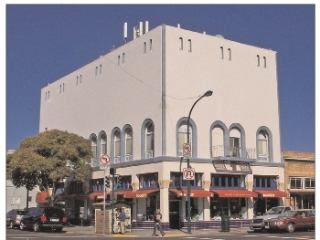 In 2004, Alameda Drugs, a long time Alameda institution decided to cease operations. That business had occupied retail space in the Odd Fellows Building at the corner of Park Street and Santa Clara Avenue, for over seventy years, beginning circa 1930. Growing over the years, Alameda Drugs expanded into adjacent retail tenant spaces until by the early 1960s, it was occupying the building’s entire ground floor. Circa 1962, in an effort to keep up with prevailing fashion, Alameda Drugs remodeled the building’s entire retail facade with split sandstone facing, more modern show windows, and a large perma- nent metal awning which covered up the original awning boxes, Romanesque column capitals, and transom windows above. 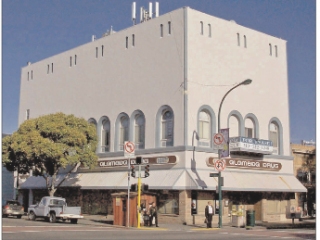 The Odd Fellows have occupied their present site since at least 1878, when they con- structed a wooden two-story Italianate building to house their Lodge Hall. The Lodge Hall was on the second floor, above retail space on the ground floor. Plenty of gingerbread and a corner octagonal tower with witch’s cap finished off their new building in fine style. Circa 1920, there was a large fire on Park St. that burned out half a dozen buildings while leaving the wooden Odd Fellows Building undamaged. The fire must have influenced thinking within the Lodge about a new building featuring “fire- proof construction”, because when they erected the present Romanesque-styled three-story edifice in 1927, the floors, roof, and perimeter walls were of poured-in-place concrete. The new building featured a full basement, Retail ground floor, Offices on the second floor, and a magnificent Lodge Hall on the third. “Cast Stone” (moulded concrete) column capitals, win- dow arches, watertables, cresting, and other architectural features completed this Romanesque Revival composition.

In December 2004, Alameda Drugs announced their intent to cease operations. The Odd Fellows were committed to bringing back the building’s former glory— as much as their finances would allow. They retained A. Rule Designs to design a new ground floor storefront facade which would recreate as much as practicable, the original 1927 design. Since the original architectural drawings for the building were long lost, A. Rule Designs relied upon old photos, measurements, and broken bits and pieces of original building fabric found behind the 1960s remodeling to recreate the original design. The original awning boxes and transom windows above were found to be intact, but the original moulded concrete column capitals were just shards. The shards were glued together to create a master mould, and ten new column capitals were recreated from that. New bulkheads below the show windows were tiled with the same size and pattern as the original, and new entry and glazing systems were installed.

At the suggestion of Rob Ratto, Executive Director, Park Street Business Association (PSBA), the Odd Fellows applied for Retail Facade Improvement grant money available to retail tenants and building owners through the City’s Facade Grant Program. The size of an individual grant is a proportion of the total construction cost of a facades remodel project, which includes signage and awning installation costs as well as building fasade construction costs. Once approved, the grant is split 50-50 between the building owner and the retail tenant. In the case of this facades remodel project, Odd Fellows was awarded $10,000, and Doumitt Shoes was awarded $10,000.

While not representing a large share of the total cost of a Project, a facade grant nevertheless promotes good design, and urges business owners to exert that extra effort to ensure that their remodel projects will be of high quality, and will be an asset the com- munity can truly take pride in.

AAPS Preservation Award: The Odd Fellows have carefully remodeled their storefront’s facade to reflect the building’s original design. In so doing, they have enhanced the visual experience all people share when visiting Alameda’s primary shopping district. The Odd Fellows have clearly demonstrated that the sensitive remodeling of a historic structure is both practical and possible, while preserving its historic character. The Odd Fellows Building is a positive example for others to follow in remodeling historic structures, both in the Park Street Business District, as well as in other locations throughout our community.