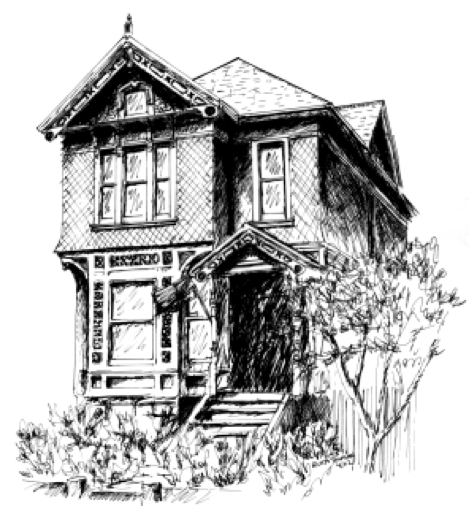 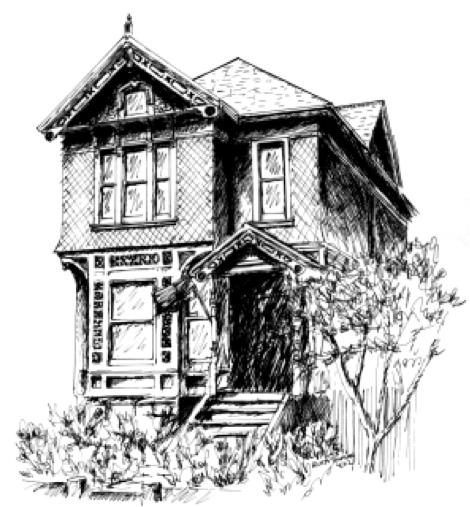 A Gem Once Again

This lovely Queen Anne at 1185 Park Avenue, designed by architect Charles Shaner, was built for Robert Harvey in 1890 for $3,500. In the early 1920s, the home was divided into a duplex. Walls were built to separate the first and second floors. Two additional exterior staircases and doorways were also rigged. In 1950 the structure underwent another transformation, this time to the exterior. The majority of the home’s ornate exterior was encased with cement-asbestos siding, a big “home improvement” trend during that time period. 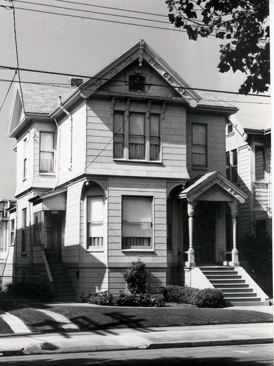 On September 18, 2000, only two and a half weeks after current owners Betsy and Scott Mathieson moved in, they began restoring their Victorian-in-the-rough. For more than 20 years, the couple resided in the San Jose area, where they had renovated two other historically significant buildings. Their new house in Alameda would be their third and final soulful project. Betsy and Scott, both geologists, felt that even though the foundation to their 110-year-old home was sound, the building needed to be bolted down to a foundation to withstand an earthquake. This meant replacing the original brick foundation with a new concrete foundation. To increase the home’s livability for their young family, the owners also decided to increase the square footage by having the basement dug out for a home office, a home theater, a bathroom, and a washroom. Soon after local concrete specialist Ken Gutleben completed the foundation work, he installed a stairwell from the first story to the basement.

The walls that had previously separated the two floors of the living quarters were dismantled exposing the original floor plan. A floor furnace in the dining room; the only source for heat in the entire house, proved inadequate. It was replaced with two separate furnace units. One was installed in the basement to heat both the basement and the first floor, and the other was installed in the attic to heat the second floor. Another major undertaking for the inspirational couple included a full roof replacement. As Betsy exclaimed, “A cross section of the roof”s shingles was about two inches thick.” After inspection, the rain gutters were found to be in good shape, but the downspouts needed repair. Luckily, the only area of dry rot was under the front porch steps. Within two days of erecting the scaffolding, contractors had removed the asbestos siding. The home appeared almost as good as new. Its siding was well preserved with only minor deterioration to some of the shingles.

The Mathiesons were delighted by the amount of decorative gingerbread that had survived the Victorian’s past alterations. 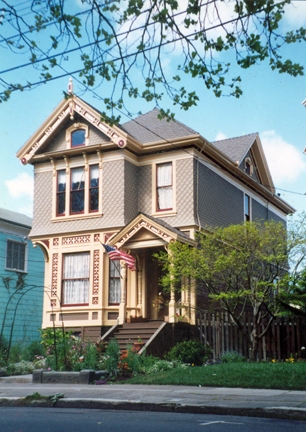 Only window aprons and other projecting trim work had been severed. The “ghost” markings allowed Scott to determine how the original woodwork appeared. From these markings, he created templates. Bob Haus remilled the gingerbread and Scott installed it himself. Scott also demolished the two porches and staircases of the upper unit as well. Local contractor, Alan Pryor, filled in the former upstairs entrances with the same type of redwood siding and shingles used on the rest of the house. Betsy repaired all of the windows in the Victorian. Over the years, paint and caulk had accumulated between the joints, making the windows unstable. Betsy tediously removed every pane of glass, disassembled the frames, and cleaned up the residue. She then reassembled and primed the frames, and then reset each windowpane with new caulk. Betsy was able to complete only one window per day, just barely staying ahead of the painters. The Mathiesons chose seven hues for the exterior paint job, predominantly the rich tones of mocha, rust, and several shades of gold. The lustrous color scheme is reminiscent of an elaborately painted cable car. Recently, a new driveway and walkway were poured in the same configuration as the original. The use of the pigment lampblack was integrated into the concrete and then an acid was washed in, giving it an aged appearance. Raised concrete curbs surrounding the front yard’s perimeter have also been added; Scott designed them to complement existing curbs in the neighborhood.

Indeed, the Mathiesons have mastered the art of home restoration. Their once mucked-over Queen Anne now shines on Park Avenue like a beautiful gem.