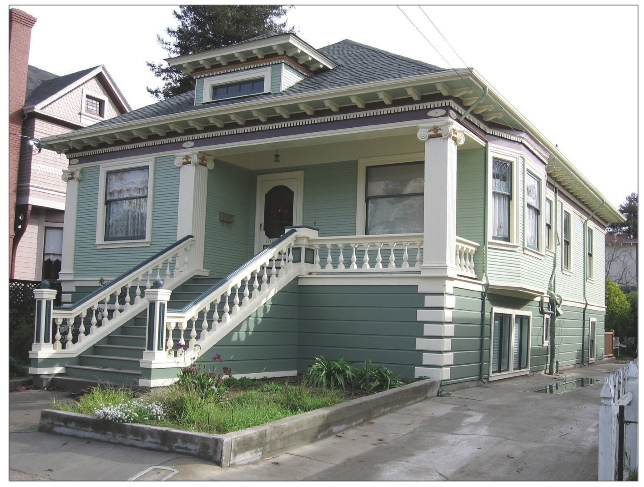 Take A Match To It 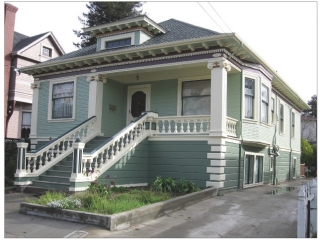 That is what Nancy’s dad told her when he first saw the house before she and Jim purchased 1206 Union Street in 1996. In fact, Jim had a pretty hard time convincing her of the house’s potential. Great neighborhood, good-sized lot and the possibility for expansion were all there. Uncovering and realizing that potential finally came to fruition this past year. The process, however, was very convoluted with many changes along the way.

This high basement Colonial Revival built in 1906 was unrecognizable as such when they bought it. Not only was it encased with stucco, but they also discovered a layer of asphalt shingles covering the original redwood siding. The budget did not allow for the renovation just then. More important items, such as new foundation and roof, took priority. Some day the opportunity would come.

In 1999 they decided to paint the exterior. It was bad enough looking at the stucco, but the dingy pinkish beige was even worse. The new paint scheme helped tremendously. With the arrival of their third daughter, it became evident that it was time to explore the expansion potential. Even though the new foundation had been constructed to allow for a ground floor remodel, Nancy and Jim wanted to investigate expanding up to the attic.

After much discussion with architect Scott Brady and contractor Tom Carroll, and weighing the pros and cons, they decided to go down, rather than up. But, at this point, they preferred a higher ceiling than the current foundation would allow for. It was back to the drawing board. Solution: keep the existing newer foundation and lift the house one foot. The decision to remove the stucco and asphalt was not yet included in the remodel plans. It was not until the contractor told them the price to re-work the stucco and fill in the gap for the one-foot void, that it hit them. Now is the time for the exterior renovation opportunity. 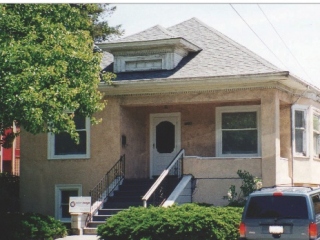 The adventure began. Both layers of unwanted siding were removed and the signs of what had once been there were uncovered. There were ghost marks for everything: medallions, pilasters, quoins (alternating corner blocks), capitals and corbels. They also found the porch column and some original turned balusters under the stucco porch railing.

Next, they began the process of gathering all the materials to put the pieces back in place. Jim spent countless hours researching what and where to buy. He describes this as the hardest part, adding, “and of course, paying for it!” For Nancy, the biggest difficulty was making decisions. They both agreed on the decision to only use high quality materials and to do their best in replicating original detailing. To save money they trekked north to Nancy’s dad’s home in Ashland, Oregon and used his workshop to make some of the wood pieces. Jim turned the stair balusters and Nancy made the quoins and over 100 corbels. Bay area master plasterer Lorna Kollmeyer made the column capitals.

Nancy grew up in a Queen Anne Victorian in Berkeley that she helped her dad restore. Her dad is a do-it-yourselfer. As a teenager she made about 1000 shingles for the exterior of that house. At that time, however, she never imagined that she would someday be involved in a major exterior renovation of her own home.

The experience was both frustrating and rewarding. The family of five lived in one bedroom for many months. As with any major building project there were some delays and unexpected costs. But they remember with excitement how amazed they were to discover what had been hidden for so many years. Daughter Clare described the stripped down structure as a ‘ghosty house’ and commented that they should have left it that way for Halloween. The initial plan to expand not only doubled their living space, but it presented the opportunity to make the exterior of their home beautiful once more. Nancy gives Jim credit for his initial persistence and vision to see the ‘potential’. She is also glad that they did not take her dad’s first comment to heart. Now, she says, her dad is very proud of what they accomplished, as he understands how satisfying this kind of project can be.