This elegant towered Queen Anne residence was built in 1891 by Brehaut and Diamond, a prominent firm credited with at least seventeen Victorian era homes in Alameda.  David Brehaut was an architect who participated in building another twelve Alameda homes with other partners. 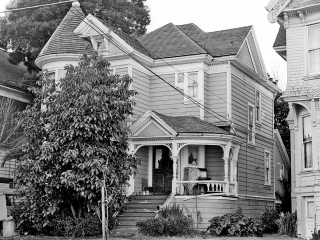 In September 2014 the house, by now severely dilapidated, was rescued by Damon Rees, tonight’s award winner.  The front was largely intact, though a non-original ground floor door interrupted the façade.  That door was removed and the original siding extended to patch the opening.  The weathered outside was prepared and given a beautiful paint job.  The back of the house was reimagined by Alameda’s own Martha Tout Design.  The kitchen and back deck provide a wonderful family space, and great care has been taken to retain the period flavor of this important house.