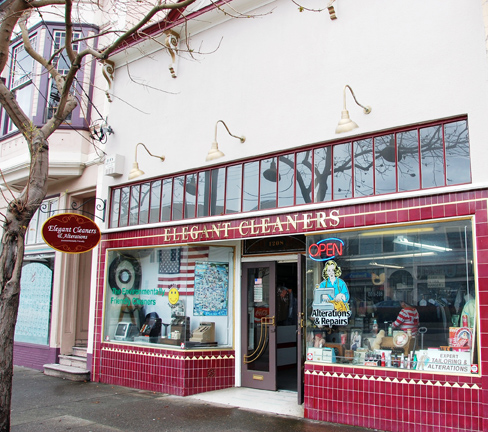 Bay Station is one of the original stops on the Red Train Commuter Loop, which helped Alamedans get to work each morning for decades. Today, perhaps the best known business in this little business district is Pagano’s Hardware, but there are a variety of other businesses with interesting past histories in the neighborhood as well.

In 1869, the tracks of the Transcontinental Railroad went down the middle of what was then named Railroad Avenue, to a ferry terminus, which connected the East Coast to downtown San Francisco. Even in these early days, a small business district began to grow where Sherman and Bay Streets crossed Railroad Avenue.

In 1889, William H. Noy built a building at 1208 Railroad Avenue to house a large butcher shop and retail meat market. Noy’s Meat Market became one of the largest meat markets in the East Bay, and the business lasted for many years. Celebrating the 100th Anniversary of Abraham Lincoln’s birth, the citizens of Alameda renamed Railroad Avenue, Lincoln Avenue, in 1909.

Next door to Noy’s was a Nickelodeon Theater, built in 1911. Operated under various names over a 40-year period, it was best known as the “New Lincoln Theater”, showing movies on a single screen to an audience of 300 viewers, until its closing, circa 1950. Today, this building is used as a church. 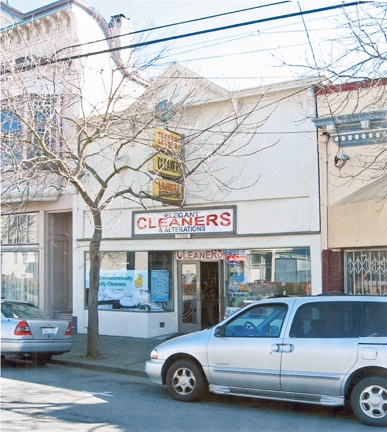 By the late 1940s, Noy’s Meat Market was gone, and in its place, was a dry cleaning establishment. Various dry cleaning and tailoring businesses have continued to occupy the site until the present time. Dee Bee Cleaners and Tailors sold the building circa 2007 to the present owner after deciding that newly mandated changes to dry cleaning chemicals, made it not economically feasible for their business to continue. Deciding that tailoring and alterations would be their sole focus, they sold their building, and moved farther up Lincoln to their current location next to “Whales & Friends”.

Michael Sadeghi, the building’s new owner, decided to take advantage of the City of Alameda’s Façade Grant Assistance Program. In so doing, he committed to a Façade Rehabilitation Project, which had a rather nebulous scope. It was obvious that the original ceramic tile bulkhead and show window surrounds were still there, but they were under many coats of paint. The true condition of this construction, likely dating to the early 1930s, had to be exposed for further evaluation. After weeks of paint stripping, the tiles proved to be in remarkable condition.

The double entry doors, again painted many times over, still had their original hardware, and appeared to be salvageable. More paint stripping revealed real gems hiding underneath. Mr. Sadeghi wanted a new stained glass transom incorporating the numbers “1208”, to be installed over the entry. He hired Ken Mathias to do the work. One of Ken’s last projects, it turned out magnificently.

The building was repainted, and new signage installed. The completed façade has breathed new life into Bay Station, and sets a fine example for others to follow. For Michael Sadeghi’s vision and efforts resulting in the transformation of Elegant Cleaners & Alterations, this award is given.