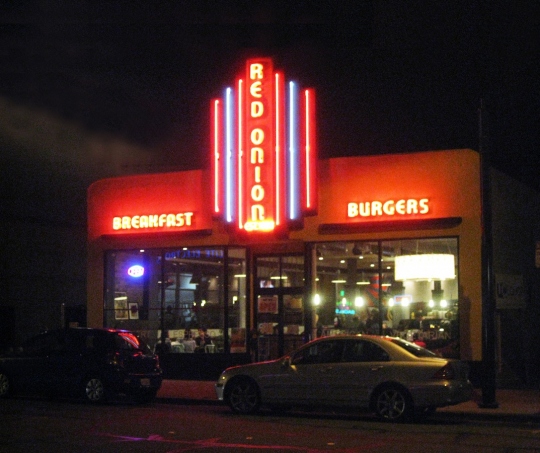 The recent conversion of 1222 Park Street to restaurant use is a fine example of the continuity of community traditions. The current owner, Buffie Choi, an Alameda resident raised in the Island City, belongs to a family of restaurateurs. Her mother, Ivy Yee, owned several restaurants in Berkeley, including Raza’s Garden and Ivy’s, on Telegraph Avenue, and Claremont Seafood across from the Claremont Hotel, as well as the Ducal restaurant on Webster Street in Alameda.

In the 1980s, Mrs. Yee purchased the original Red Onion, established in El Sobrante in 1963. There were two other Red Onion restaurants, in El Cerrito and Pinole, opened in the 1970s and 1980s. Mrs. Yee purchased the Pinole Red Onion in the 1990s and trademarked the name. Her son, Johnny Yee, runs the Pinole Red Onion, and has worked with his sister, Buffie, setting up the Alameda Red Onion. “It was so exciting to have the opportunity to open a Red Onion in our hometown,” he said. The building they leased turned out to be perfect, both for its architecture and its historical associations. 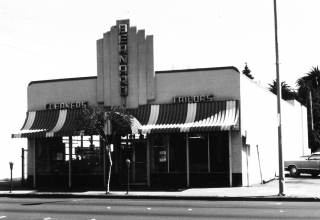 Built in 1946, the structure originally housed the tailor shop and clothes cleaners of Bernard Bernardi, who had learned his trades in the family business established by his father in the 1920s in Alameda. The business was originally located across the street in the little brick storefront at 1221 Park Street, built in 1929. After World War II, Bernard Bernardi commissioned the new building at 1222 Park Street, from the design of architect F. W. Dakin. Mr. Bernardi lived in an attached apartment at the rear of the building, finally selling the property in 1968. The business kept going under the original name through the 1990s. From 2000 to 2010, Amazon Tropical Fish Supplies occupied the building. Red Onion restaurant opened here in January 2012.

The building is a fine example of Moderne style commercial architecture, notable for its stepped pylon, generous expanse of display windows, and high degree of integrity. The original Bernardi signage consisted of vertically applied metal letters on the pylon (“Bernardi”) and horizontally applied letters over the windows (“Cleaners” and “Tailors”). During the occupancy of the Amazon Tropical Fish Supplies, the original signage was removed. 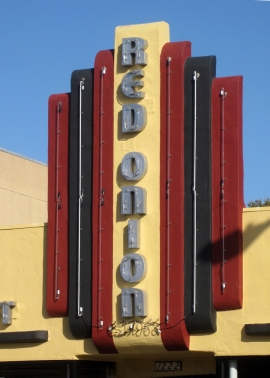 Under the guidance of Oakland designer Wes Hildebrand, and the oversight of the Historical Advisory Board and city planner Simone Wolter, the building’s 2011 rehab made excellent use of the original Moderne styling. Vertical neon tube lighting was added to the pylon, accentuating the zigzag shape. Neon lighting was also used for the business name (“Red Onion”), applied vertically at the center of the pylon, and for the pair of horizontal words over the display windows (“Breakfast” and “Burgers”). The new signage reprises the look and feeling of the original with the added zing of period-appropriate neon. The adaptive reuse of the interior works equally well—a spacious room with high ceiling, kitchen and counter to one side and open seating on the other, where diners sample the restaurant’s selection of breakfasts, specialty burgers, pastas, and desserts. In more ways than one, Red Onion is a tasty addition to the Park Street business district.