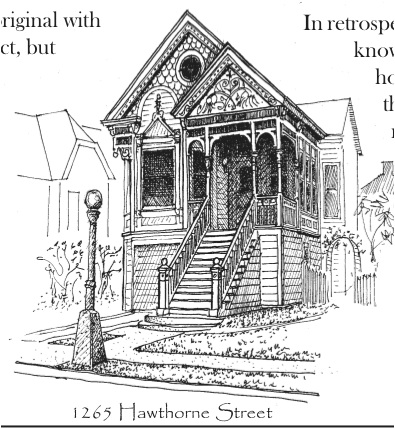 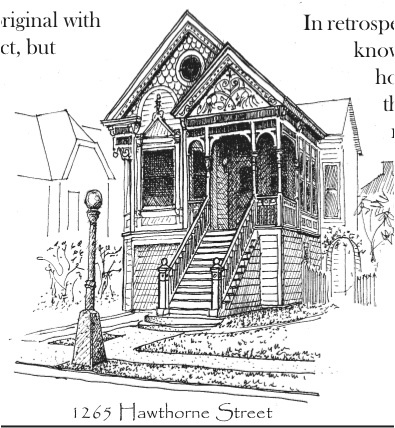 The Marcuse & Remmel designed home at 1256 Hawthorne Street wasn’t immediately recognizable as a Victorian when Alan and Marilyn Pomeroy bought it in 1987. The redwood fancywork original to the vintage 1893 building had been amputated, and the house was covered with aluminum siding in a tasteful but dull shade of gray.

“Alan convinced me that we should take on this project,” said Marilyn, talking about the total restoration of their house. “Of course I had no idea how long it would take!” First they tackled the foundation with a concrete one and adding a bedroom, bath, family room and laundry on the ground floor. “We were driven by the fact that we had to do our laundry at the Laundromat, where someone raided the drier and stole some nice clothes belonging to our daughter, Lauren.”

After those essential underpinnings of the house were finished, the Pomeroys tackled the main floor. Alan described the project, “We stripped the woodwork, refinished the oak floors and removed the dropped ceilings in the kitchen and bathroom.” When the interior was completed, they thought their house was finished, but the aluminum siding began to nag at them.

Marilyn went on, “When I started working in real estate in Alameda, the ugly front of our house began to bother me. I spent all day looking at other people’s Victorians and realized I couldn’t live with the aluminum anymore. People who visited our house were always totally surprised. “Oh, it really looks so nice on the inside.”

“We wanted to put in a garage, so we decided to do the entire house front at the same time. The contractor peeled back the aluminum siding, revealing a second layer of shake shingles. When those came off we discovered the scares of the original trim, which helped Alan and architect Steven Aeillo make the new design as faithful as possible to the original. We also found the round window up on the gable’s peak that had been hidden by the siding. We got porch columns and other millwork from Haas Wood and Ivory Works in San Francisco. Alan got up on a ladder and traced all those little floral decorations in the gable, and then he cut them out in his basement workshop. He developed a motif for the stairway and porch railing that looks like a candle flame; he used that same motif in the archway that leads to our rose garden. “We were playing around with all kinds of colors for the outside. Then we realized we wanted to use the same colors as our friend Bob Anderson, whose house at 1815 Caroline Street received an AAPS award last year. So we modeled our paint scheme on his. Bob didn’t mind; he even gave us samples.”

The Pomeroys’ home restoration has taken thirteen years to complete. In making suggestions for other potential Victorian house renovators, both of them agreed that working with an architect is the best way to plan and design an exterior restoration. “Of course we found a very dedicated man who was willing to spend a lot of extra time on our project.”

According to the Alameda Museum listing, the first owner was Mrs. Sophie Bremer and its exterior had been altered: “aluminum siding added and ornamental millwork removed.” Thanks to the Pomeroys, Mrs. Bremer would recognize her own house again.