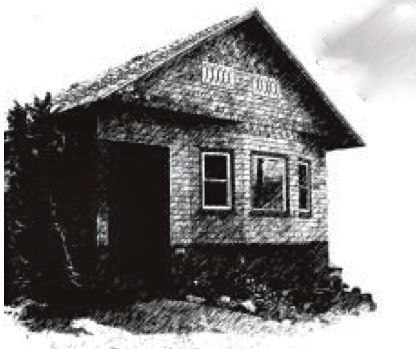 From Shingles to Aluminum to Shingles
by Chris Buckley

Roy and Carol Clark purchased 1308 Regent Street in 1991 in a probate sale. The house had been covered with aluminum siding and its front windows replaced with aluminum sliders. The building also needed lots of work.

According to George Gunn’s Buildings of the Edwardian Period, City of Alameda 1905 to December 31, 1909, 1308 Regent Street was built in 1907 by the Alameda Land Company along with three neighboring cottages in the same block at 1304, 1312, and 1316 Regent Street in the same year. The architect (if any) is unknown but the original owner is listed by Gunn as “C. Burkhard”. The Clarks theorize that the aluminum siding was added in the 1950’s when major interior changes, such as a new kitchen, were made to the structure following a fire.

The Clarks were use to dealing with “fixer uppers” having previously restored two houses in Cambridge and Somerville, Massachusetts. The exterior restoration began in 1998, following completion of major interior work. Mr. Clark did the reshingling himself based in part on helpful instruction he received from State Shingle Company in Oakland. He completed one side per year, finishing in 2002 with the front elevation. 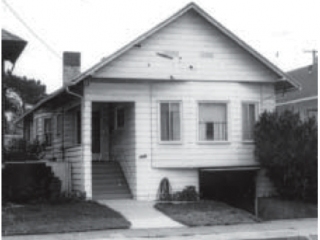 The Clarks’ exterior restoration work included removing the aluminum siding; replacing the original deteriorated wood shingles under the siding with new shingles on the main level and with V-groove redwood siding at the basement level; replacing the front elevation’s aluminum windows [two sliders and one fixed] with new double hung and fixed windows; and replacing the previously removed water table molding separating the shingles and V-groove siding. Although very much in the spirit of the house’s original Craftsman architecture, the work was not a strict restoration. The shingles were originally all rectangular, while the new shingles also include scallops and zig-zag shapes. The basement level was originally shingled rather than V-groove siding. The new porch column is  in a Classical fluted style, very typical of this type of home, replacing the original shingled column. A stained glass window from a 200 year old Boston church was added to the rear. The original front door was cleaned-up and stripped by a neighbor across the street and reinstalled with a new frosted glass upper panel.