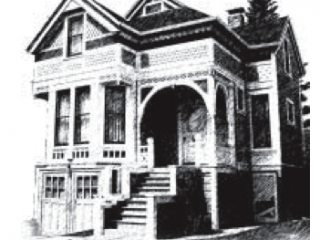 In 1992, Louis and Mary Rocca had been searching for a home with a basement that Louis could use to work on his old pinball machines and jukeboxes. Mary passed an “Open House” sign at 1309 Regent and returned with Louis to see the home because it is a Queen Anne cottage with a high basement. After seeing the home, Louis sat on a chair in the kitchen and told Mary to go to the bank because “he wasn’t leaving”.

The house was built in 1890 by J.H. Young for $2,400 and was adorned with many patterned details. Young added fish scale and diamond shingles to his surfaces. Fish, stars, rosettes, piano key dentils, sunbursts, lattice work, spindles and other intricate board and batten decorative friezes were also added to barge boards, porch, above windows, below windows and in peaks of the gabled roof. The Roccas studied the history of permits issued throughout the years and discovered brown shake siding was added onto the sides and rear of the home in 1918. Sometime later, asbestos and plywood were affixed to the front of the house giving it a gray front absent of any design.

The Roccas began their “buried treasure hunt” in 1996 when they decided they wanted to paint the house to restore it to look like it did in pictures they had seen. As Louis removed the asbestos and plywood from the front of the structure, he discovered all the intricate decorative facings beneath and was “fueled” to continue as he discovered more of the original detailing that had been covered. Much of the adorning designs had been cracked by the nails used to add the asbestos siding and plywood. Some had been completely removed but their ghost markings remained.

While visiting friends in Eureka, the Roccas found the “Blue Ox Millworks Historical Park” and the craftsmanship they were seeking to recreate the intricate designs to add back to the home. Louis made tracings of the designs and sent them to Blue Ox, where they were reproduced using original Victorian tools. While the Roccas waited for the adorning pieces, Louis meticulously used a heat gun to remove the original paint carrying a small fire extinguisher and wearing a respirator at all times. (He went through three heat guns to complete the project.) 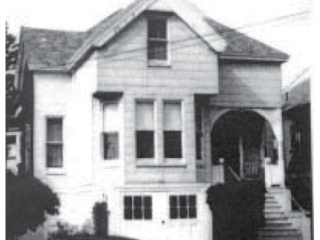 A colorist provided the Roccas a color scheme employing six colors including gold leaf accents to the intricate millwork. The house received its green primer shade and first color in 2002 and the house “came to life”. Not all the millwork was complete at the time of painting and more will be added and painted this spring. The front attic peak above the window will receive an intricate gold leafed design, the side peaks sunbursts and the porch rosettes, all remade using the original tracings.  Fish and stars will be also added to the barge boards and the porch arches to complete the restoration.

The Roccas purchased their home with the intent of staying there the rest of their lives so this labor of love to restore it to its original splendor is for themselves. The next project? Landscaping.