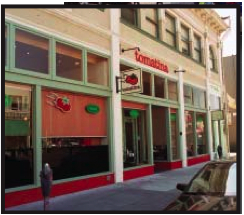 The Delanoy Building and the Park Theater 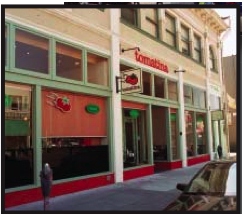 This Historic Preservation award winner is the handsomely rejuvenated property at 1336-46 Park Street, with retail shops, offices, apartments, and a grand assembly hall. It was constructed in 1901-4 by builders Delanoy and Randlett for owner Fred Delanoy’s Central Investment Company.

The Theater had a brief but vivid life, opening in 1904 with a combined bill featuring vaudeville (“The Tramp with the Soubrette”) and a spanking new kind of entertainment, the moving picture The Train Robbery, projected on the Parkoscope. Its heyday was brief, as “bigger and better movie theaters put the Park out of business shortly after World War I,” according to Woody Minor’s Heritage column in the March 25, 1994 Alameda Journal. After that, the building became a warehouse and then a showroom, and its pressed tin ceiling was hidden by an acoustical tile drop ceiling studded with fluorescent lamps. 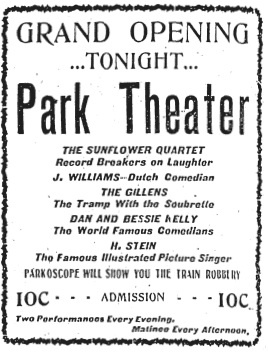 The current owner, who thoroughly renovated the building and revived the tin ceiling, is local developer John Knowles, who talked to AAPS News about why he chose not to modernize. “The history that lives in old buildings really speaks to me. There is something solid and substantial that we can’t reproduce today, so I just try to respect it.”

He went on about what was involved in his project. “Before you make sure it’s pretty, you have to make sure that it is strong enough to last! The previous owner had already complied with the seismic safety ordinance, but that ordinance is created to save the lives of people, not to preserve the structure itself. So we did a lot more voluntarily, otherwise you end up with the structural equivalent of junk bonds!”

“When we started out work, each storefront was different. One was covered with plywood, another was hidden by stucco with a puny glass window, in another the brick was plastered over and the windows were covered by plywood. Originally the building had distinct storefronts, each with a separate address. Over the years most of the stores got congealed into one big store. So part of our renovation was to bring back the individual stores, coordinated into one harmonious building. We stripped all the stucco off the pilasters, then we put back windows that are close to the original ones.”

“I deliberately kept the color scheme simple and dignified so as not to interfere with the show space for the stores. As the owner and renovator of the building, I try to provide the space and atmosphere to help retail shops thrive. I wanted to give them presence and light but I did not want my color to distract from the store keeper’s display.”

John discussed the renovation of the former Park Theater. “When I bought the building, the theater was used as a back office. It awes dowdy and dim inside, with a dropped ceiling, fluorescent lights, and plaster over brick wells. One day I peered up and through crack and discovered the coved ceiling that had been hidden for seventy years. I felt like Indiana Jones on an archeological expedition! Lots of the pieces were damaged or falling apart, so through the W.F. Norman Company in Nevada, Missouri, we ordered replacement parts.  A ceiling from their 1909 catalogue was an exact match and they still had the original plates, so we were able to put it all back together. “We tried to get a theater company in the space, but they couldn’t get the financing. However, we did find a fabulous tenant—Aviso, Irving Hamilton’s public relations firm. They lease the entire theater space. They did need individual offices, but their cubicle walls are low so the sight lines flow and the ceiling is completely unobstructed.”

Irv Hamilton talked about the happy coincidence that led him to the historic space. “ My wife and I were walking down Park Street one evening and I was curious about what was happening here because we needed a larger space. We stopped in the Enchanted Garden florist shop and asked who was redoing the building. The proprietress said, “John Knowles and he just happens to be here right now.”” So I introduced myself and John brought us inside the theater. What a mess! Then I looked at the ceiling, and I was hooked. Every client who comes in here looks up and gasps. We even incorporated a detail of the ceiling in our company logo.”

John Knowles has some cautions for anyone contemplating such a renovation project. : You have to make the enterprise cost-effective. Left unchecked our hearts can land us in financial ruin. The building has to show and rent well and work for the tenants, because there are a lot of expenses, from the original mortgage to all of the restoration costs. Much of the work doesn’t show; we redid all of the electrical and water lines, we improved the seismic work and upgraded the heating system before we even started on the historic fabric. But now we’re done, and the spaces are leased by great tenants, I think this project proves that historic preservation is good business that can also be very rewarding.”