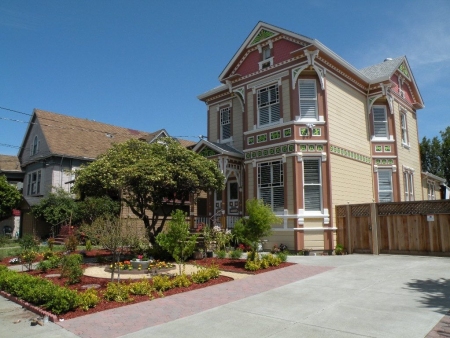 In May of 2008, Shu and Won Yuen bought the very dilapidated Victorian duplex as a fixer upper investment. Now, nearly two years later it has become their wonderful home. Its faded glory shines once more.

This highly ornate Queen Anne residence was built for Elizabeth Hannah in 1892; the builder and architect are unknown. Most likely during the 1930’s, the house was converted into a duplex and remained that way until the Yuens purchased it. For many, many years the house suffered neglect and deferred maintenance. I can personally attest to the wretched condition that it was in, as I saw it when it was on the market. The downstairs was uninhabitable with gaping holes in the walls, ceilings and floors. The upstairs was in a similar state, but was occupied by long-term tenants. This was not just a fixer upper, but an extreme fixer upper. I remember worrying about the fate of this special house. It would take the right buyer with the fortitude and skills to make it right again. 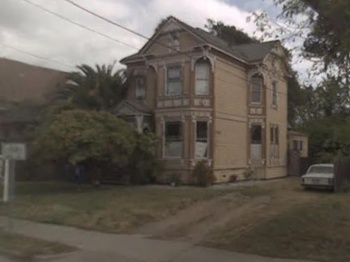 Fortunately the Yuens were up for the challenge(s). There were many. One of the most difficult was the daunting task of removing the debris and filth left by the upstairs tenants and others. Shu, Won, their twin daughters Holly and Christina, and Joseph Zhang did most of the cleaning up themselves. Next came dealing with obtaining the permits and approvals from the city, which was fraught with delays and complications. Finally they literally “broke ground” and began with replacing the foundation. They continued with virtually every component of the house. The infrastructure included less exciting, but vitally important, new wiring, plumbing, heating, roof, windows and more. These kinds of improvements contribute to the longevity and preservation of an historic house. Next came the more visually gratifying improvements: beautiful new kitchen and bathrooms, lovely hardwood and tile floors, crown moldings and light fixtures.

As I was touring the house with the family I was struck by the amount of attention to detail and the quality of workmanship throughout. One of the daughters recalled how many weeks her dad spent working on the plans. He came up with a plan that had the least impact on disrupting the interior floor plan. Over the years I have seen far too many rehabilitation projects that were done with poor design, cheap materials and shoddy work. Not the case here. Some of the best examples are the windows and the intricate millwork surrounding them. Many of the pieces were replicated to match the existing ones. The same treatment was given with sections of the exterior siding. The weathered and damaged exterior was superbly restored and prepared for painting. Upon close examination I had trouble differentiating from the old and the new. The color selection and placement beautifully enhance the fanciful and intricate patterns of the applied millwork.

The Yuens were not expecting all of the attention that they got. Neighbors, friends and passers-by all cheered them on as the project inched along. This definitely helped them to keep going. Now they are enjoying life in their beautiful “new” Victorian and love being in Alameda. The daughters pointed out that they are seeing signs of how their efforts are inspiring other improvement projects with neighbors. Yes, that is how it starts and often grows. Thanks to the Yuens for being the spark and for showing us the star on Broadway.