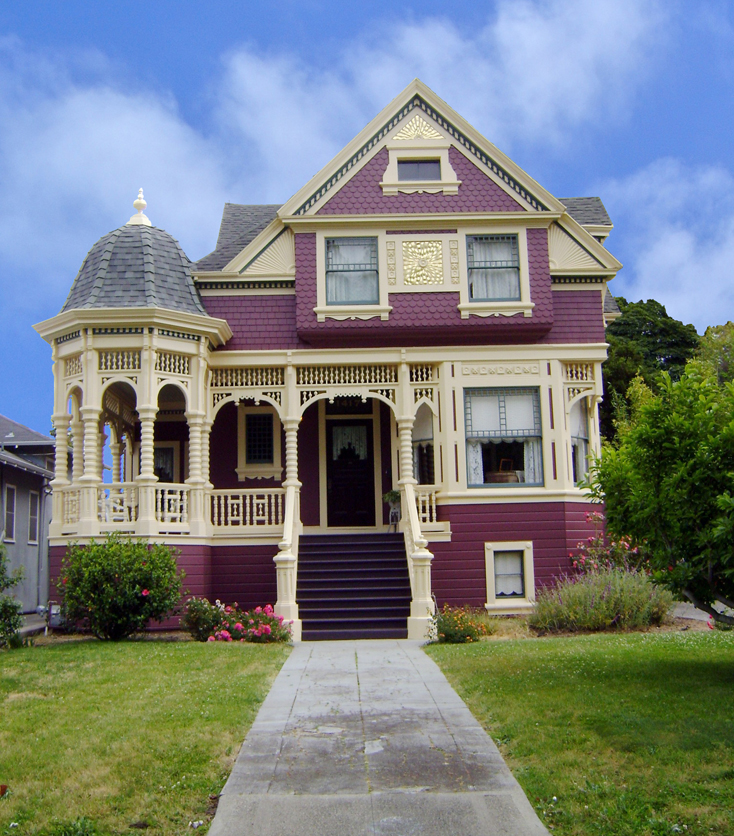 This is the story of a Queen Anne that has changed her outfit not once, not twice, but at least three times that we know of.  Originally constructed in 1886 for a prominent San Francisco Attorney, George Wright, the home across from Franklin Park was set among the oaks of the Gold Coast.  Wright was the leader of the Gold Coast set and a founder of the Alameda Tennis Club built next door, which is remarkably still in use as a residence.   By the time the Park opened in 1923, the facing streets were lined with an enclave of stylish houses dating from the 1880s and 1890s.  A number of them were designed and built by the talented A. W. Pattiani whose first home here for the Wrights was one of Alameda’s first Queen Annes.  His second home for the family, built next door at 1421 San Antonio, was a Colonial Revival. Pattiani also built the shingle-styled Alameda Tennis Club behind the houses.  Together, this group of Pattiani buildings embody Alameda’s style trends at the turn of the century. 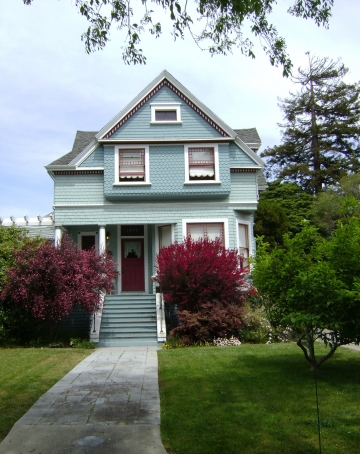 However, sometime soon after it was constructed in the 1890s or 1900s, the Queen Anne at 1417 was enlarged and remodeled.  Classical columns on the front porch were added and shingles were installed over the wood siding on the base of the house. Brackets were removed and many other “fussy” Victorian details and ginger bread were probably lost as well. Colonial Revival was the popular style of the day and it demanded simpler details with classical  elements.

Fast forward to 1996 when another attorney, Lynn Faris and her husband, John Faris, a math teacher purchased the house. The home still sported a front porch with classical columns and a lovely Shingle Style trellis, but alas, it was now dry rotted and required replacing.  In the absence of any record of the original porch, Rynerson O’Brien Architecture studied many other Pattiani homes in Berkeley and Alameda for inspiration on how to design an L-shaped Queen Anne porch.

A cupola, Steve Rynerson concluded, was how Pattiani might have resolved the corner of a Queen Anne porch. Pattiani’s Berkeley Queen Anne, on Ward and Fulton, was the home which ultimately provided the model for the Faris’ cupola in Alameda. Steve reinterpreted and adapted that cupola design to fit the porch at 1417 San Antonio. Of course, with a little artistic license and Skeeter Jones from Clear Heart Construction, the final Cupola ended up being a Queen Anne tour de force—with balusters, spindles, and sumptuous turned columns, the porch is truly stunning.

Of course, during construction, what began as a porch rebuild, soon turned into a journey of revealing details. Underneath the lower shingles, the original wood siding was discovered and restored. In other areas, shadows and traces of Victorian trim long gone were found and replaced. As for the upper front windows, Steve—again with artistic license—recreated Victorian sunburst panels which truly brought back the Victorian character lost at the turn of the century to Colonial popularity.  And as construction progressed, more Victorian details were discovered or added such as corner brackets and spindles and the project finally morphed into a fascinating study of facade restoration.

Ultimately, the removal of the historic Colonial details and the resurrection of Victorian details has resolved the home’s Queen Anne geometry with it’s original architectural period.  The project is also an example of the dilemma preservation work faces: with no historic evidence of the original porch design, rebuilding anything other than what is existing is an exercise in speculation.  It can often lead to a false sense of history— what’s original and what isn’t?  Consequently, if the home had been on the National Register of Historic Places, the recreation of a new porch would not have been allowed if Federal funding or other Federal approvals were involved.  However, on the Faris’ home, Rynerson O’Brien Architecture and Clear Heart Construction did the next best thing:   they studied all of Pattiani’s Queen Anne homes, conducted extensive research on his unique style, and designed a porch that Pattiani would have approved of.  The result is a home that is a masterful improvement to a well-preserved neighborhood.

Lynn & John Faris have indeed dressed this lovely Queen Anne in a splendid new outfit.  In doing so, they have given the community a truly remarkable piece of architectural craftsmanship at its best.