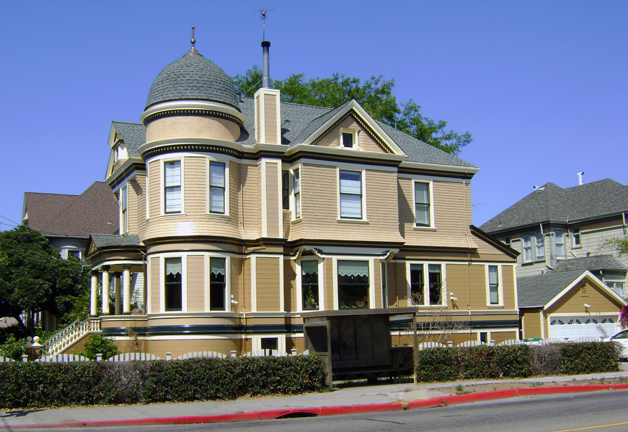 A Queen Anne Finally Gets the “Right” Restoration

Looking a bit worn in a City photograph from 1979, this grand Queen Anne has finally gotten the restoration it overwhelmingly deserved… and needed.

Located in a neighborhood full of magnificent older mansions, 1502 Grand once again dominates the intersection of Grand Street and Santa Clara. Built in 1893 by Albert W. Cornelius for $4,250, in recent years, the home had languished and fallen into disrepair. Albert was a homebuilder who went on to a successful architectural career. At the time he built 1502, its owner was his wealthy mother-in-law, Nellie Liese (Cornelius also built the house next door at 1510 Grand, but that’s another story). 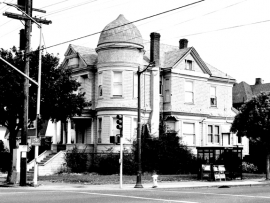 The restoration of 1502 Grand came about through a serendipitous sequence of events. The house had been poorly maintained as a rental property for decades when its last landlord was fined for an illegal basement unit. Two speculators bought the structure in 1998 hoping to “flip it” for a tidy sum. The upgrades cost more than planned and they went bust before completing it, though not before gutting the home’s interiors and replacing its foundation. Luckily, they never got to the exterior or the home might now be clad in vinyl or stucco.

And at that opportune moment, along came the current owner, Stewart Wilson, an entrepreneur whose favorite hobby was restoring old buildings. He proceeded on a full-scale, top to bottom restoration of the manse’s exterior façade. All the exterior finishes are new with the exception of some irreplaceable historic features: the gold leaf relief above the front porch and bay window, the stucco on the front façade, the egg and dart molding around the turret, and the small attic windows and surrounds. All the rest had deteriorated due to poor maintenance, old age, and negligence — tar lining had destroyed all the redwood gutters causing dry rot and decay in most of the walls. 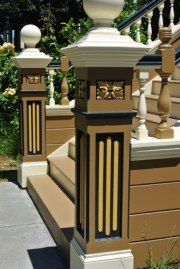 All the shingles, siding, trim work, millwork (straight and curved), and windows are accurate reproductions of the originals. And if the original was redwood, its replacement had to be redwood. With the help of some talented craftsman, Stewart and his crew also discreetly added shear walls, insulation and did some noise abatement. And for posterity, they back-primed all the exterior wood not once, but twice! They treated the gutters with UV-filtering shingle oil, used treated radiata pine for the siding, and installed copper for the turret dome and downspouts.

To top off all the exacting work, an inspired eight-color paint scheme was created by The Color Lady, which brought out all the wonderful details and craftsmanship a grand Queen Anne could ever hope for. Not surprisingly, Stewart himself applied the gold leaf.