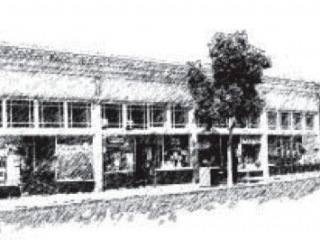 Members of the Volberg family have lived in Alameda since the 1870’s; Richard Volberg’s great grandfather, Charles Volberg, settled in Alameda in 1872 where he lived the rest of his life. Charles Volberg played an active role in the community, serving terms on the Board of Town Trustees (1877-1878) and the Board of City Trustees (1887-1891). In the Fall of 1873, Volberg purchased a large parcel of land, with house, at the northwest corner of Webster Street and Santa Clara Avenue. Over the years, he developed the Webster Street frontage of his property, which extended north to within 60 feet of Haight Avenue. 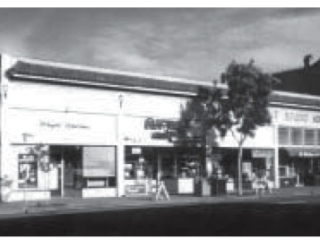 In 1877 he commissioned a four unit commercial building at 1513-1519 Webster Street which is presently a one-story, rectangular-plan Mediterranean style building. The original builder was Denis Straub, a prominent Alameda contractor active prior to 1900. The original building was simply detailed with a flat topped parapet and a wooden awning extending out over the sidewalk. A $1580 remodeling by contractor W.J. David commissioned in 1925 by Charles Volberg resulted in the present handsome Mediterranean style facade.

The tenants in this building have included Shead’s grocery store, Seebeck’s saloon, Stilling’s variety store, and Harm’s art supply. For 40 years it was the West End branch of the Alameda Free Library. It has been tough going with the building; during the 1950’s an attempt was made to modernize the building by the addition of plywood over many of the windows. In the 1960’s, Webster Street went into a decline as businesses changed to cater to sailors from the Navy base. Webster Street had the feeling that every corner had at least one liquor store or bar; it felt very tough and uninviting to families.

After the Navy base closed, Richard Volberg worked closely with the City and WABA [The West Alameda Business Association] on plans to revitalize Webster Street and bring back the flavor of Old Alameda. The extensive and lengthy discussions convinced Richard Volberg that the City and community were serious about bringing back Webster Street; and thus he felt it appropriate that his family make a real commitment to restoring the building to what it once was. He knew that in the short term he could probably get a faster return with a simple paint job but he felt that given his family’s ties to Alameda and the City’s efforts to revitalize Webster Street that his family could risk a much greater investment of time and money.

The process of restoring the building including removal of woodpanels/vertical siding at the bulkheads of three store fronts. The entire bulkhead was then tiled in a color matching the existing color at the fourth store front. The clerestory/tansom windows were restored—almost complete now except for the turned decorative moldings to be placed vertically between windows and the cleaning or refurbishing of the mosaic  tiles It has been a real labor of love and AAPS thanks the Volberg family for its continuing commitment to Alameda.