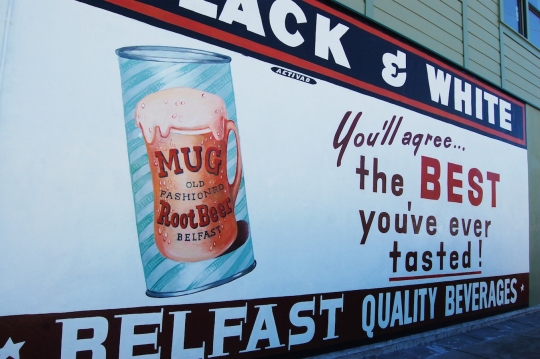 Subsequent owners sought to camouflage its origins, first slathering on stucco and then covering that indignity with metal siding, and aluminum windows.

As so often happens in restoration, there was a surprise waiting to be discovered. Under the tin squares workers found a period soda advertisement. The tastefully revitalized building now boasts this authentically restored sign for Belfast Mug Old Fashioned Root Beer. First produced by the Belfast Beverage Company in the early 1950s, Mug Root Beer was originally available only in its native San Francisco, but the secret soon went nation-wide and Belfast prospered. In 1986 the company was acquired by PepsiCo.

The sign was discovered under the tin squares, painted on top of the stucco. Painstakingly restored, the sign adds an interesting historical element to Webster Street. Silver-striped cans were produced in the 1960s, before PepsiCo bought Belfast, so the sign is about fifty years old.

Michael McDonald is the artist who lovingly restored the sign. The city contributed funding for this valuable “collectible”, which will add interest and charm to Webster Street for years to come. The owner, Don Lindsay, has a long history of supporting Alameda preservation. When he acquired the building he decided to acknowledge the “Tin Building’s” origins as much as possible. While full restoration was not practical, Victorian elements such as dentil moldings, brackets supporting a new cornice, and decorative windows give an appropriate flavor to the ongoing renovation. The highlight is the period soda sign!