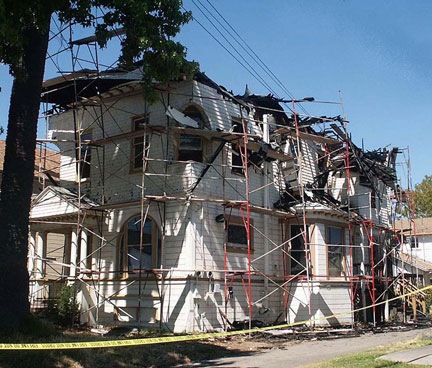 Fire! A home renovator’s nightmare. In July 2006, the two-story Queen Anne house at 1524 Bay Street was caged in scaffolding, undergoing a renovation and observing the 114th anniversary of its birth. A fire broke out and consumed the roof, the attic, the beautiful front gable and its window, and portions of the second floor. The rest of the structure was somehow spared destruction but doubtless suffered significant smoke and water damage. 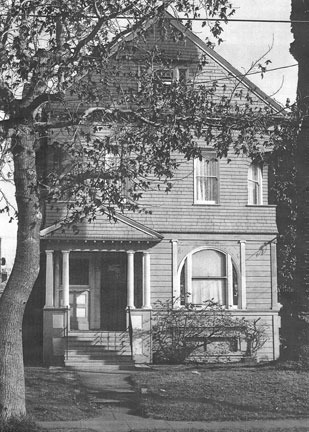 Recovery and reconstruction began, with a rebuilt attic designed to serve as a game room. After the new roof and walls were completed, observant passersby noticed that the rebuilt house looked much different from the original, which had been designed by Howard Burns and built by D. Straub & Son in 1892. The roof was flatter and the attic appeared to be higher, with perhaps a lower second-floor ceiling to provide extra space in the attic. The structure had lost a significant aspect of its Queen Anne identity. The City of Alameda Planning Department reviewed the situation and provided guidance to the owners and their builder/engineer, who returned to City Hall with a redrawn set of plans. The attic had been redesigned, the roof configuration would essentially match the original, the slope of the gable would be steepened, and the height of the ridge would be increased. Appropriate architectural details, such as fascia boards below the eaves and eave brackets below the gable, would be reconstructed on the house. Siding and window trim would match the originals. The damaged portions of the house would be reconstructed in accordance with the City of Alameda Design Review Manual, as befits the house’s status as a structure eligible for inclusion in the State Historic Resources Inventory, according to the City of Alameda’s Historical Building Study List. 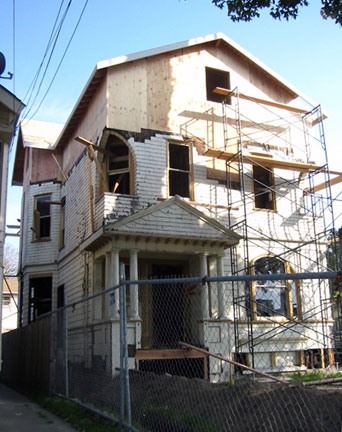 The owners had the initial reconstruction work torn out and began anew. They completed the shell of the structure, roofed and painted it, and continued with a major interior renovation, which included correcting work that others had done without permits over the years. Somehow, during these tough economic times, the house changed hands. The owners moved on.

Current owners Tie Jun Liu, Xiao Hong Ruan, Michael Low, and Jenny Liu bought the vacant, gutted house at 1524 Bay Street last fall. A 6-foot-tall chain link fence surrounded it. There was no plaster or sheetrock on the walls. Tie Jun (“T.J.”) Liu, himself a contractor, dived into the renovation project determined to preserve the house’s remaining historic details while adding sheetrock, kitchen cabinets, and other necessities and amenities. The renovation is nearing completion, with final exterior paint and landscaping remaining to complete the return of the house to its former glory.

The house at 1524 Bay Street recovered first from the 2006 fire and second from a hasty initial reconstruction project designed without benefit of the City’s Design Guidelines. We would like to acknowledge the accomplishments of the previous owners, who had the understanding and foresight to tear out the first reconstruction work and the patience and dedication to preserve the historic character of their house. In addition, we would like to recognize the initiative and resourcefulness of the new owners for carrying the renovation through to completion, making the house an inviting home that contributes to the historic streetscape once again.