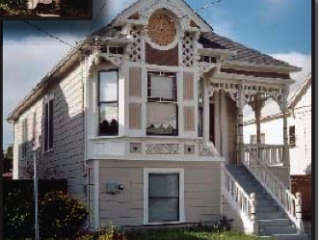 On Wednesday, June 27, 2001, a fire displaced the Ramos family from their home at 1525 Minturn Street. The house was built in the early 1890s and is one of a group of similar and very distinctive Victorian houses on the block designed by the locally important architects and developers Marcuse and Remmel.

By the time the fire was extinguished, most of the roof had been removed and much of the house destroyed. However, most of the architecturally significant front façade below the roofline survived. Numerous contractors approached the owners in the following days and weeks offering their services. It was through this process that the owners were given the name of designer Will Harrison. They began working with Mr. Harrison in January 2002 and submitted a plan for review by the City in February. 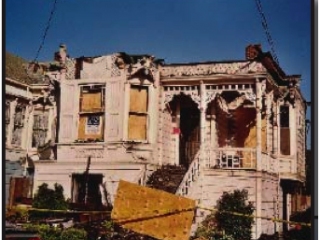 The original plan involved demolishing the fire damaged structure and replacing it with a simplified version. Because the building was on the City’s Historic Building Study List, the demolition required approval by the City’s Historical Advisory Board (HAB). The HAB voted against the demolition. The City Council affirmed the HAB decision upon appeal. The plans were then revised to rehabilitate the fire damaged structure and were finally approved in early 2003.

By spring 2003, the foundation work began with Ken Gutleben as the contractor. In approximately two months, the foundation work was done. After the foundation was finished, the selection of the general contractor started. With the help of “Simply Sue,” a local Alameda consultant, Pacifica Construction in Oakland was selected. Their selling points were that they were easy to work with and were experienced with Victorians.

Construction on the house started in October 2003 and lasted about a year. Pacifica Construction started work on the downstairs electrical and plumbing first. As they progressed with the internal framing, they also worked on the exterior. Rebuilding the roof started around January 2004. For ease of installation, a truss system was built off site and then placed on top of the walls.

As many of the exterior details as possible were salvaged and reused. Most of the siding at the front of the main floor is original, but the siding at the lower level is new. Much of the original siding that could not be retained in place was used on a new garage at the back of the property. The top of the destroyed front gable was modeled from an identical house on Lafayette Street. The gable was constructed separately and laid on top of the front facing slope of the new hip roof. Salvaged details such as the “bulls-eye” bosses on the front bay window were stripped by J.D. Harpe and Co. in Alameda. About half of the bosses were missing and had to be replaced. These and many of the other missing details, such as the small brackets under the front gable were fabricated by Haas Woodworking in South San Francisco. Haas also replaced one of the entry stair’s newel posts after the original was stolen. Other detailing, such as the scrollwork on the front bay window was made by Pacifica Construction. New dual glazed wood windows were made by Ocean Sash and Door in San Francisco.

Although charred on the inside, the original paneled Eastlake style front door was reused with new plywood surfaces on the inside. The sandblasted glass transom showing the street address above the front door is new. The color scheme was borrowed from a beautiful home located on High Street, one block south of Encinal, and uses gold leaf on the boss buttons and other details.

The three rooms in the front of the house remained in the Victorian style. Framing for pocket doors was discovered during demolition, so the owners took advantage of that and installed new pocket doors. The dining room and former bedroom were previously joined by a single doorway, but are now combined into a single space since much of the former wall was torn down. The rear portion of the home is completely new and therefore reflects a more contemporary style. The ceilings were restored to their former heights of 11 feet, eliminating the drop ceilings installed by a previous owner. As part of the foundation work, the downstairs was dug out to provide adequate headroom while maintaining the original height of the exterior basement walls. The lower level now comfortably houses four bedrooms, two baths, utility room and numerous closets and storage areas. When the owners first saw Will Harrison’s plan showing all that could fit in the downstairs footprint they knew he was worth every penny.

The owners are pleased with the final outcome and have received many compliments from neighbors and friends. Since the completion in October 2004, others on the street have been busily working on improving their homes. Mike Kirby, owner of Pacifica Construction, was a joy to work with and very accommodating when it came to changes to the original plan.