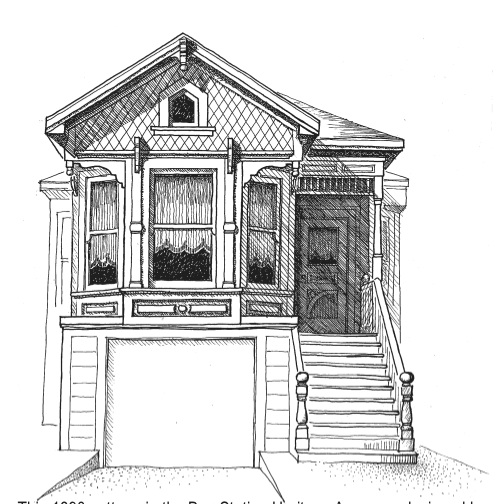 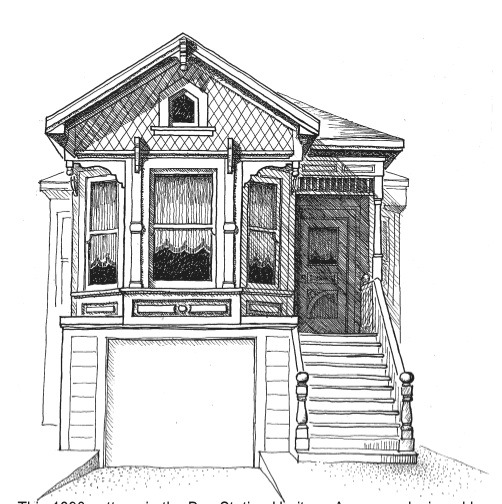 Virginia Ragsdale and her late husband bought the house at 1529 Mozart Street in 1958 for $11,000. Some of the millwork had been removed, and the wooden front stair handrail had been replaced with rough 2 x 4s. “During the early 1970s, we put aluminum siding on,” Virginia said. “We knew within three months it was the wrong thing to do. The siding stayed on until 1999, when I finally decided to make the house into a Victorian again.”

Virginia’s first project was to hire a local contractor William Stroud to scrap the deteriorated stairs with their makeshift handrails. Mr. Stroud looked around the block at the other Victorians designed by architects Marcuse & Remmel, then ordered special baluster turnings from Beronio’s Lumber in San Francisco.

For the major part of her renovation, the removal of aluminum siding and restoration of the Victorian façade, Virginia reports, “I was fortunate to have a dedicated, honest and loyal family member, Marty Navarro, who did seventy percent of the sanding, priming and preparation work for the house. With his father, Gilbert Navarro, Marty peeled off the aluminum siding, which they recycled, instead of taking it to the dump. It took them three months, but we are proud of the results.”

With contractor Richard Hewitt, Virginia and Marty worked on the next step, a design for the replacement millwork. “We looked at the few pictures we had; but they didn’t show what was on the house originally. Richard has worked on a lot of Victorians, so he tried to figure out what might have been here by looking at the neighbors’ houses designed by the same architects.”

The front door, which has a handsome sunburst design beneath the window, “was covered with plain old green paint. Gilbert Navarro used a heat gun on the outside, and I used it on the inside. Next I used paint stripper, a putty knife and a scraper, then sand paper and steel wool to finish it. The work took place over some days, because you can’t work steady on it. You start smelling the stuff, and then you quit. I am finishing it with a varnish so the wood shows. I’m also going to put in an old fashioned doorbell that you turn.

Virginia and her family took great pains to rejuvenate this cottage to reflect the original Marcuse & Remmel details that abound in the Bay Station Heritage Area of which their house is a part. She talked about why, at the turn of the 20th Century, she decided to make this substantial investment of time and money at the age of 76. “I just got tired of looking at the aluminum siding; it did not match the house. We would have started this project sooner, but when my husband got ill, we just left things alone. In his honor, I chose Herman’s favorite colors from Pagano’s to paint the house: Acapulco Skies, True Blue, Aerospace Blue, Ming Vase, Dante’s Ridge, and Marshmallow. Of course, Herman wouldn’t recognize those names, but he would love the colors. I’ll bet he approves of the whole project!”

She’s not finished yet, “I’m going to get back to working on the inside. I’ve got the windows stripped down, I’ve got new baseboard, and I’m going to replace all the moldings because I want everything back to the original.”