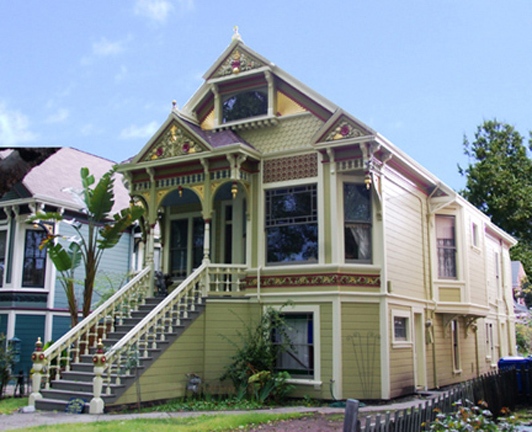 It was 1975, and Tommie Veirs and her husband stopped their car in front of 1530 Mozart Street in Alameda. Tommie today describes the almost mystical connection that day with the Marcuse and Remmel high basement Queen Anne cottage as “love at first sight.” It’s a love affair that has continued for almost forty years, and today this gem of a house graces Mozart Street spectacularly. She has expressed her gratitude for the recognition from AAPS, calling it “one of the proudest moments of my life.” It’s easy to see that Tommie is happier for the house, whom Tommie refers to as “she,” than Tommie is for herself. It’s a reward the house has earned by being true to itself. 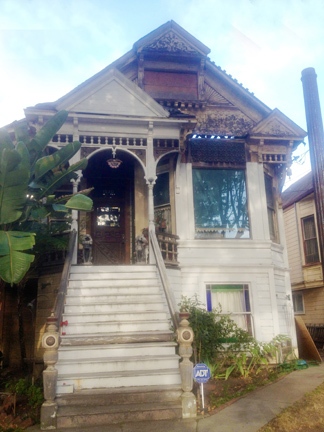 Tommie has researched the house and its history. It was designed and built to the tastes and specifications of its first owner, R. A. Rose, who lived there until 1906. Shortly after the 1906 San Francisco earthquake and fire, a San Francisco family, including the two daughters, purchased the house. The daughters, artists of some note, remained single and lived in the house for several decades. A third owner sold the house in 1975 to Tommie and her husband, only the fourth owners in more than one hundred twenty years. This house seems to have cast an affectionate spell on every owner.

The original owner’s surname, Rose, is recalled by the “R” worked into the decorative band around the first floor. Tommie familiarly refers to this treasure as “Rose Cottage” in his honor. The restoration work that she has coordinated herself — acting as her own general contractor — included restoring the cresting on the roof. Her discovering the cresting in the basement inspired this project. It had apparently been removed in an earlier roofing job and never reinstalled. Some unknown worker years ago saved it for a happy reunion with her rooftop. Architectural details were adapted from another Marcuse & Remmel house around the corner on Verdi Street. A model was carved and then reproduced by the Master Plaster Craftsman. Front stairs were rebuilt.

In 1981 Bob Buckter designed a color scheme, which was tried out in a sample area on the front. It must have been beautiful, or at least one of the neighbors thought so, because the color scheme was copied and used on the neighbor’s house. Never defeated, Tommie later enlisted Buckter again, suggesting two base colors that she especially favored. Those are the colors on the house today. Myron Olson did the painting, a spectacularly beautiful job.

Oh, the “green house?” Tommie insists that she “knew” the house was green when she pulled up in front forty years ago. But the visible part of the house wasn’t green at all. It was only when the painters began to strip the house down to the original paint that the truth was revealed: The original color was green.

How did Tommie know? Well, she always said she had a mystical connection with the house from the very first. No one who listens to her talk about this much-loved house could doubt it. 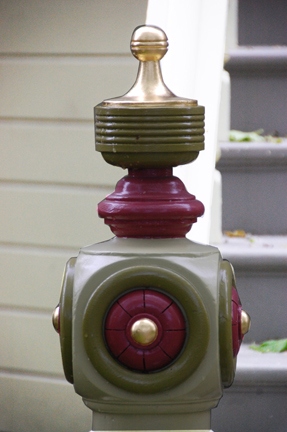