The Powell Building anchors an important section of period commercial buildings on Park Street near the corner of Lincoln. The site was first developed in the Victorian era prior to 1900, but in about 1919 a major fire destroyed most of the original structures in this block. Rebuilding occurred soon afterward, producing, among others, the Powell Building and the neighboring Fort Knox building on the corner of Lincoln.

The Fongs were aware of Alameda’s Façade Grant program when they began planning the restoration. However, when they went to the city with their plans, they learned that the program had been terminated in an economy move. Undeterred, the Fongs proceeded with the restoration, Mr. Fong doing much of the work himself.

Mr. Fong’s son Harry, a long-time Alameda resident and Alameda High School graduate continues the story: My dad’s very first job when he came to America from China, was in construction. He had much success in this field but his passion was in the restaurant business.

Before opening the restaurant in Alameda, my dad had worked as a bus boy in Reno, Nevada. This was around 1985 and after some years he was able to quickly pick up skills that led him to become the head chef of that restaurant. When he had saved enough money he decided it was time for him to open his own restaurant and he was confident enough to set out and do this. 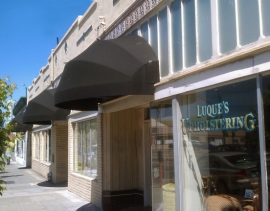 At this time, a good majority of our family had already been residing in Alameda and support from them would be crucial for success. My dad knew that Alameda was the best choice and made plans to set up shop. In 1991 he opened the doors to Genghis Khan Kitchen. From then on, we were fortunate enough to enjoy success with welcoming arms from the community. From the very first day we opened, our hours of operation have always been seven days a week. That being said, my parents have spent a lot of time in that building and pretty much knew all the ins and outs of the building. Their dream since they opened the restaurant had been to own the building that they dearly loved. Twenty years later they had that chance. The Von Wittenau family had been the perfect landlords from the very beginning and their efforts were instrumental in my family achieving our goals. In 2012 both parties came to an agreement and my parents were able to make their dreams a reality. 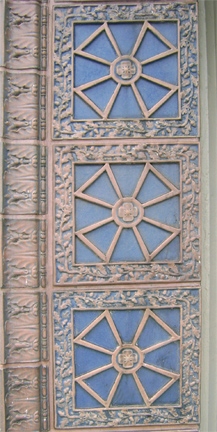 As soon as we acquired the building my parents already had a vision of what they wanted to do. With my dad’s background in construction he was able to be completely hands on and was able to do most of the restoration himself. He took his time with the restoration and made sure not to cut any corners. In addition to façade restoration, he did a lot of work to the foundation and roof, things that people wouldn’t see but things that only my dad knew would be the most important aspects of the longevity of the building.

When deciding what he wanted to do with the façade, we all agreed that we should not touch the original tiles that lined the outside wall, they were beautiful decorative tiles that have stood the test of time and we felt that we should not do anything to change this, but to add to them in order to highlight them. Some of these things included, updating the color of the walls, replacing the trim, power-washing the walls and transom windows, and replacing the awnings, making them smaller as not to hide the details of the building.