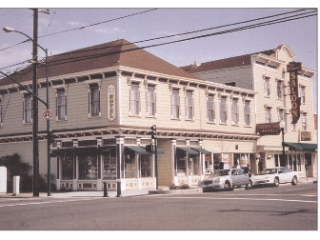 Developer Steve Case of Preservation Arts and Redevelopment, LLC, stripped away signs of aging and neglect to return the Neptune Palace Hotel, originally Holtz Hall, to a splendor worthy of its heritage. Built in phases between 1875 and 1880, the two and three-story structure at 1544-52 Webster Street dominates the east side of Webster Street between Lincoln and Haight avenues.

William Holtz moved to Alameda in 1869 and opened the first grocery store in the West End, which became a classic country store and meeting place for the scattered residents and farmers. In the summer of 1875 Holtz moved his West End Grocery into the ground floor of his new two-story building at Webster Street and Lincoln Avenue. The upper floor became Webster Street’s first public hall, which later was converted to Holtz family residence.

In 1879, Holtz had a second building erected at 1548-1550 Webster St., adjoining the corner store. This second building was originally one story but later became two stories and contained commercial and office space.

In the spring of 1880, Holtz erected the last of his Webster Street buildings. The new building at 1544-1546 Webster St. housed a spacious public hall on the upper story with a space for two stores at street level. Holtz Hall opened in June 1880 and for 30 years served as one of the principal meeting places in the West End.

After Neptune Beach opened in 1917, Richard E. Jeffrey, then owner, divided Holtz Hall’s tall interior space into two floors and the Hotel was born. The Hotel was known in the 1920-1930s as the Neptune, and Riptide, and finally became the Webster Hotel. Probably in the 1950s, the building was covered with stucco and much of the exterior trim was removed. 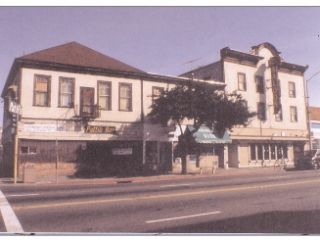 The comprehensive interior and exterior renovation included removal of all exterior stucco, historic restoration of the channel rustic siding, replacement of the historic hotel sign, reinstallation of Italianate style trim and windows and exterior remodeling of the corner store space so that it now looks similar to Holtz’s original corner store. The restoration also included the manufacturing of 112 brackets and 58 window cornices to replace those that were no longer there. Each bracket was individually carved, cut and assembled with eight unique redwood sections per bracket in the on site fabrication shop of Preservation Arts and Redevelopment. The current phase of the restoration was finished in 2005.

While removing the building’s stucco, workers uncovered the remains of an original sign within the main cornice’s center plaque bearing the 1880 construction date and the name Holtz Hall. That unexpected treasure has been preserved and will be reinstalled.

Today the building contains a 40-room hotel on the 2nd and 3rd floor. The ground floor is occupied by a corner market, hair salon, nail salon, and soon to open “Aquacota”, an Italian restaurant.

Parco members Steve and Veronica Case stated that “they hope this project will make every Alamedan stand up and notice the importance of preserving the past.” The dedication, expertise and encouragement of so many people, particularly Richard J. Gerdes, Woody Minor, Chris Buckley, Sherri Stieg, Michael Garavaglia, Sheila McElroy and many others, helped to make this project a great success.