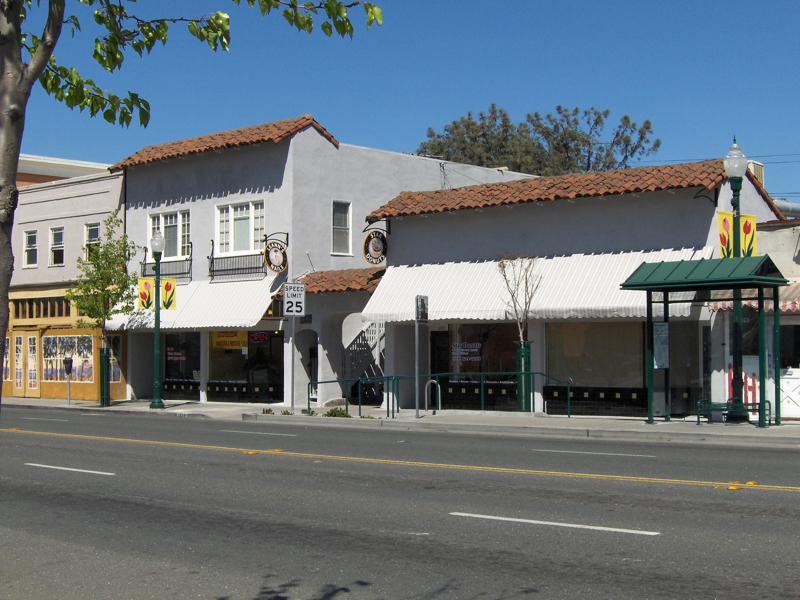 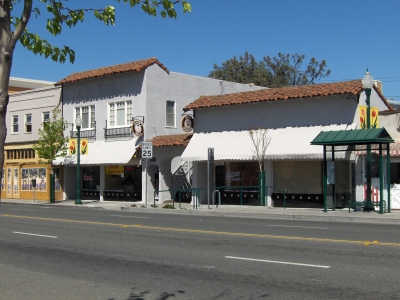 During the 1870s and 1880s Webster Street was an important entrance into Alameda. The town did not become an island until 1902, and the major overland route to Oakland ran on Webster across a bridge near where the Posey Tube is today. The area had a strong sense of identity early on; the West End Building Association was an influential civic organization, and several businesses used the moniker “West End” in their names. One such was the West End Market, which with its neighbor to north, the “West End French Laundry” and the flanking store to the south, had stately unified façades in the Victorian mode now called “Italianate.” Its stylistic hallmarks were much in evidence: tall narrow windows, classical wood decorations, and dramatic bracketed false fronts like a cow town stage set. The structure that housed the meat market, 1610-1614, was designed by realtor-architect W. G. Flynn and built in 1878. Its owner and proprietor Phillip Gochnauer lived upstairs and operated the business until his death in 1899. The Italianate storefront next door, 1606-1608, had a murky provenance according to local author and historian Woody Minor, “Its history is problematic, although it may have been built in 1877 for Alameda co-founder Gideon Aughinbaugh,” who owned the corner structure. While no early records have been found, Minor wrote that a photograph taken in1905 shows that both Aughinbaugh’s place on the corner and 1606-08 Webster were identical one story Italianates.

These Victorian era buildings presided over the 1600 block of Webster until 1929, when the owners “undertook a major alteration,” Minor wrote. The result: fancywork details were shorn, and the fronts of the properties were reconstituted in the “Spanish” style popular at the time, complete with stucco surfaces and top hats of red tile. 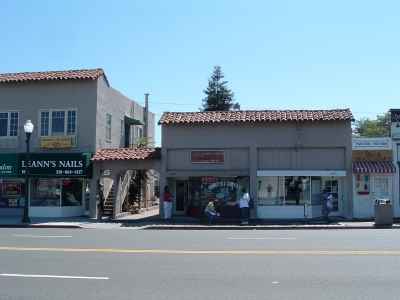 Sue Russell, staff for the City of Alameda Façade Assistance Program, approached Joan Trainer, owner of 1606-08 and 1610-14 Webster, in 2005, and suggested a much-needed makeover. Ms. Trainer hired Alameda architect Daniel Hoy to helm the rejuvenation effort. Restoring the places to their 1870s originals would have been too costly, so their 1929 incarnation was to be cleaned, polished, and upgraded. Enter Charlie Ma, who runs an auto body shop in Oakland. A former Island resident, he was looking for investment property and bought the two buildings from Ms. Trainer in 2008. Mr. Ma decided to go ahead with the upgrade project because “I wanted to make the city look better and to get more business for the store owners who are my tenants.”

Mr. Hoy described the renovation project: “We wanted to restore the uniform look of the fronts of the buildings. Over the years they had each been altered in different ways, so we reconstructed the front entries, installed new awnings and added consistent signage. Some blue and white hexagonal sidewalk tiles that announced the street numbers were missing, 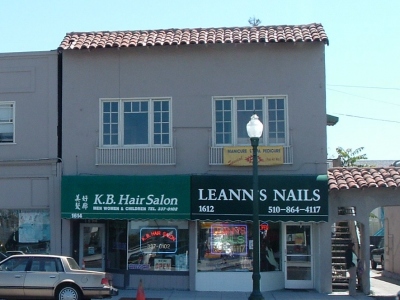 so those were replaced. Plywood and other ‘alien’ materials were removed from the tiled bulkheads, which were reconstructed. The transoms had been poorly maintained; some of the windows were painted over, and others were smothered with plywood. Those were also replaced, and charming medallion signs for the stores completed the effect. Local designer Mi’Chelle Fredrick prepared the palette for the tiles, awnings, and paint,” Mr. Hoy said. 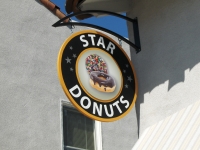 According to Ms. Russell, “They were sad, beat-up buildings that had been let go for a long time, a significant patch of blight on Webster Street. I really appreciated owner Charlie Ma working with the city to give these buildings the care they deserved.” Mr. Ma also bought the former French laundry next door, and he is currently upgrading that property. Asked about his efforts so far, Mr. Ma said, “It was lots of work, because the buildings were so old, but they look nice now. Wait until I get the third building done, and the block will look even better!”