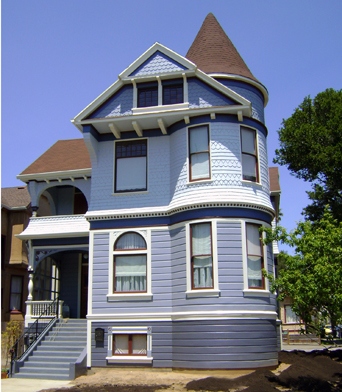 This large, two-story Queen Anne house with a round tower occupies a prominent corner in Alameda’s Leonardville Heritage Area. The house was originally owned by James W. Burnham, a real estate developer in San Francisco. The construction cost was $5,500 and it was sold for $7,000.

For the past 50 years the house has been encased in stucco siding like its sister house next door. Owner Jim Smallman bought the house in 1978 while in the midst of restoring his own home at 2242 San Antonio. He recognized 1837 Clinton’s potential for restoration; the house is one of the few mansion-scale houses built by Joseph A. Leonard that has survived intact as a single family home, and its interior is almost completely original.

The house sat in its stucco cocoon while Jim finished restoring his own home and the neighboring house at 2246 San Antonio. In 1989, business required Jim to move to southern California, so he postponed restoration of the house until his retirement. 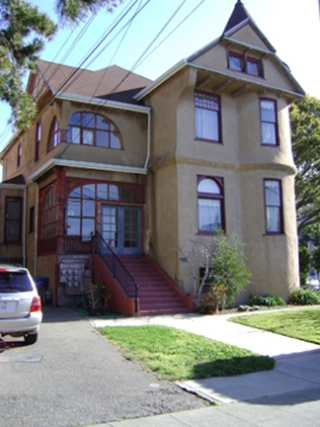 Twenty years later, in April 2009, the metamorphosis began. Jim acted as his own general contractor and worked in conjunction with John Jameson of John M. Jameson Construction. The interior was restored first, and the current tenant, John Jameson himself, moved into the house in May 2010. Another major contributor to the restoration project, José Puicon, repaired the interior plaster, selected interior paint colors and did all of the interior painting, and single-handedly prepared and painted the exterior. Less visible work includes a new foundation, structural upgrades, new electrical system, and all new plumbing.

Exterior restoration was carried out over the past year. John removed the stucco bit by bit with a diamond blade in a hand-held circular saw carefully adjusted so as not to damage the original siding underneath. Portions of the upper-story shingle siding required repairs, and the missing water-table moulding at the base of the first floor had to be replaced. The biggest challenge of that step was figuring out how to curve the wide new moulding where it wraps around the corner tower.

Jim and John made vertical saw cuts on the back of the moulding, then repeatedly wetted it and gradually bent it into a tighter and tighter curve, fitting the moulding to the tower. Smaller missing mouldings were recreated using paint shadows left by the original mouldings where they had butted against adjacent architectural elements. Glass enclosures were removed from the original entry porch and the large balcony above the front door.

The only adaptive change made to the exterior is the new rear deck which replaced an architecturally incompatible added exterior stairway and basement entry. Jim designed the new deck to be consistent with the house’s Victorian style. A single-car garage currently under construction beneath the rear deck will be accessed from the side of the house along Lafayette Street.

The house was showcased on the Fall 2010 AAPS Alameda Legacy Home Tour. The interior is almost completely original, including a stunning art glass window, electrolier light fixtures, four fireplaces, “curly” redwood and oak woodwork that has never been painted, and a rare coffered ceiling in the entrance hall. Elsewhere, Jim took pains to recreate the few missing interior decorative elements. He made the fireplace summer screen in the study himself by making a plaster cast of an original cast iron summer screen, mounting the cast on plywood, and finishing it to match the original fireplace surround.

In three upstairs bedrooms, original Victorian faux-finish wood graining on the woodwork had been painted over. Jim stripped the woodwork and crafted new woodgraining himself. Jim has hired Ken Matthias of Alameda Art Glass to create appropriate designs for two missing leaded glass windows on the stair landing, which were replaced many years ago with amber obscured glass. Jim remodeled the upstairs bathroom, replacing a 1920s era remodeling. The kitchen and downstairs guest bathroom are new designs with details such as door and window casings, double-hung windows, antique light fixtures, and appropriate cabinets that blend well with the rest of the house.

The ground floor (basement level) is considered living space according to the City’s records. It was originally finished space, with gaslights, lath and plaster walls, a ballroom with a stage, and an inside stairway from the entry hall upstairs. The rest of the ground floor has been reconfigured to include a workshop, laundry, utility room, office and storeroom. The original ballroom and stage will be restored.

A highlight of Jim’s restoration project was an unexpected visit from a woman and her daughter who had lived in the house in the 1960s. They were overcome with emotion while touring the interior; Jim had done to the house what they had wanted to do themselves.

Jim’s philosophy regarding historic houses is that we are all temporary guests on this Earth, and the house will outlive us all. As such, it should be an authentic structure. His advice? Just do it. Keep as much of the original concept of the house as you can. Enjoy the process of restoration and learning to do things that you never imagined you could do. This is the fourth Victorian in Alameda that Jim has restored, each with its own set of challenges. Sometimes it can be discouraging, but people will encourage you, and in the end it is all worth it. He would do it all over again. In fact, he might:

He owns the sister Victorian house next door, with its stucco waiting impatiently for eventual removal.