The congregation of First Presbyterian Church of Alameda is committed to the maintenance of the sanctuary building that was built during the winter of 1903-1904. The Sanctuary building, designed by Henry H. Myers, is representative of the Neo-Classical Revival in American architecture. It is registered on the National Register of Historic Places and is also recognized by both state and city registries. The Phase Two Renovation Project strengthened the structure and foundation of the building.

Church member Mark Cunningham, President and owner of People Space LLC, agreed to act as the church’s project manager for both Phase One and Two of the recent Sanctuary preservation efforts. Phase One of the preservation included repair and painting of the Sanctuary steps and South Entry façade, the cleaning and repair of the stained glass windows, the replacement of the yellowed plastic window coverings with clear reinforced safety glass and exterior painting. AAPS presented a Preservation Award to the church for the windows in 2004. 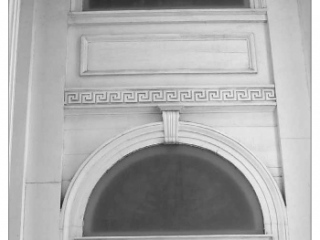 Phase Two included structural and seismic reinforcement of the foundation, South shear wall and ceiling. The lead engineer on the project was Vincent Wu who had worked on various churches and large buildings for repair and seismic retrofitting. The construction work on the Sanctuary was contracted to Buestad Construction Inc. Ken Carvalho was the on-site supervisor representing Buestad. 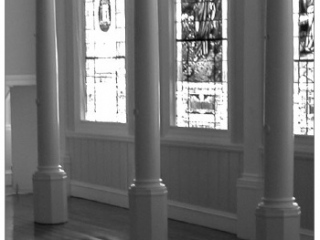 The foundation under the south wall (facing Santa Clara Avenue) had deteriorated to the point that one could pull pieces of gravel from the concrete. Perhaps part of the advanced deterioration may have been because the steps above the foundation were not sealed for a long period of time and exposure from the moisture dissolved part of the concrete. The first reports of the south wall foundation were prepared by Vincent Wu of Baseline Engineering in 1997 and again in 2001 in which he described spalling in the cement. He was asked to do a complete review of the foundation under the rest of the walls and to develop a work plan. Over a few months, trenches were dug under the church and electronic imaging was used to determine how much iron reinforcement was in the foundation and the extent of damage under the north, east and west walls.

The south shear wall facing Santa Clara had weakened to the point that it was flexing. This created many cracks in the wall that were replastered and repainted but these actions did not solve the problem. The wall had to be strengthened. The solution to correct this problem involved the rather tedious but necessary tagging for replacement and careful removal of all architectural trim around the windows, doors, ceiling and floors on both levels. Once the plaster was removed, the workers installed continuous 3⁄4” plywood reinforcement that was anchored into the newly reinforced foundation, and then ran the full height of the front façade to be anchored into the attic joists above. This wall was then replastered and the original architectural trim pieces were replaced in their original locations. Once complete, the flexing was corrected.

Since the front shear wall was anchored into the ceiling diaphragm, any flexing was transferred into the ceiling structure, causing another problem. Prevailing winds in our area caused major weather systems to usually hit the church on the front wall. If that wall had been working as it was originally designed, it would absorb most of the energy of the winds. However, the weakened wall transferred the wind energy to the ceiling joists. The ceiling was not designed to carry that much wind load and it also began to flex, causing plaster to crack and, in some places, fall. The shear wall repair solved the bulk of the cause of the cracking plaster, but another step was taken to insure a comprehensive solution. The attic was accessed and bracing was installed between the horizontal joist members to reinforce the ceiling in both the North to South and East to West directions.

After removing the pews to a rented warehouse space on Alameda Point for restoration by Cataldo Painting, scaffolding was erected and workers began repairing the ceiling plaster damage caused by the shear wall flexing. Then, Cataldo patched, primed and repainted the entire Sanctuary interior from the ceiling down, including ancillary areas leading into the Sanctuary such as entry hallways, stairways up to and including the balcony. While the scaffolding was up, all ceiling lights were replaced with long lasting, energy efficient, fluorescent bulbs.

Upon completion of the painting, the scaffolding was removed and the remaining interior was restored. The existing carpet was removed to expose the original Douglas Fir flooring. Anderson Flooring sanded, sealed and applied five coats of polyurethane. The restored pews were returned from the warehouse, repositioned and anchored. New carpet runners were installed between the pews. The same color carpet was installed in the entry hallways, the Narthex, and up the stairs to the balcony. The final touch to the restoration was a thorough cleaning and tuning of the organ, along with repainting the pipes to their original lustrous gold appearance.