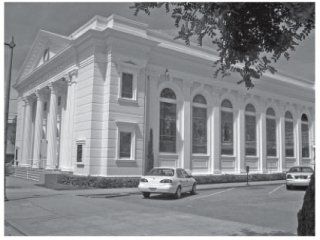 For the first half of the past century, the community of Alameda enjoyed passing by the First Presbyterian Church at the corner of Santa Clara Avenue and Chestnut Street. The sight of the large stained glass windows embedded in the Neo-Classical Revival Sanctuary Building designed by Henry H. Meyers and his partner Clarence R. Ward delighted generations of Alamedans both day and night. In the late 1950’s, concern about vandalism prompted members of the congregation to install lexan over the windows to preserve them. Over time, the lexan clouded and became opaque, nearly obliterating the beautiful scenes. Unless one entered the building to view the windows from inside on a sunny day, the treasured windows were lost behind the lexan.

In 2003, the steps to the sanctuary had badly deteriorated, as had the paint on the building’s exterior. Events on the calendar such as the Family Service League’s Annual Home Tour (The church’s Fellowship Hall was scheduled to be used for the refreshments and silent auction.) and celebrations to commemorate the building’s 100th anniversary at the present location prompted the congregation to embark on a restoration project. It was agreed the windows should be included if at all possible.

Members of the church sought bids to restore the windows – some re-leading, thorough cleaning and replacement of the lexan was requested. Bids came in with estimates from $1.2 million to $75,000. One company wanted to remove all the windows and ship them to Minnesota for repair. Local glass guru Ken Matthias declined to bid because he did not have the facilities or the time it would take to complete the work. The church members were in a quandary. The thought of removing and shipping off the beloved windows seemed incomprehensible to some. The wide divergence in cost es- timates and advice given by each bidder was confusing to a congregation who wanted to do “the right thing” from a preservation perspective. The decision was made to hire Ken Matthias as a consultant to review each bid and give unbiased advice. Ken assisted church leaders to select a “conservation” approach which resulted in some windows being removed for re-leading and complete restoration and some windows being thoroughly cleaned with leading re-worked keeping the windows in place. Ken also helped in the decision to select tempered glass over lexan for protective covering. The lowest bid, which included a complete inventory of each glass piece and an annual maintenance plan was selected, making it financially possible for the completion of the entire project in time for the events planned.

The stained glass artist who completed all the work is Joan Di Stefano Ruiz. With Q-Tips, dental tools and gentle solvents in hand, Joan lovingly spent months on scaffolding cleaning, remolding lead and cataloging each pane of glass. Joan loves glass. She earned a Masters Degree in Environmental Glass from the New York University, Venice Italy program after completing her BA of Fine Arts at San Francisco Art Institute. She studied under the tutelage of glass masters such as Narcissus Quagliata. She has since traveled the world conserving stained glass treasures in Italy, Africa, France, Mexico, California, Texas. New York, Nevada and Oregon. Her training lead to her theory that we must keep “living things historically intact and glass pieces authentic to their origins until they really fail to preserve their historic integrity.” She says, “ we must treat old glass like a fragile jewel and revere the old world craftsmanship.”

The windows at First Presbyterian Church had varying degrees of restoration needs. Some had lead failure that needed to be replaced and some had to be reworked to extend the life of the windows. Due to the design of the windows, lack of support, and gravity, the lower portions of the large windows were buckling. Cracks were abundant. To repair the cracks, Joan used silicon, which is transparent and flexible that will not “yellow with age”. No epoxy was used for this reason. Lead was reshaped where possible rather than putting in newer lead that would not be in keeping with the period look. When cleaning windows, Joan used distilled water so salt deposits would not be left on the glass pieces.

If the window pieces were particularly dirty, Joan diluted commercial cleaning fluids with vinegar and ammonia. These combinations were used only on portions of the glass that were not painted. The paint on the glass of the windows is very unstable because the windows were not originally fired in a kiln so they are “cold” paint. This has resulted in a “picking” effect where tiny holes are seen in the paintings. Joan touched up the holes but her touch-up also is “cold” and will require constant maintenance and retouches as time goes on. After the church congregation’s experience with lexan, the decision was made to replace the protective covering with protective tempered glass in lieu of newer lexan. Tempered glass is still penetrable with stones and other vandalistic action but the congregation has faith these actions will not mar the beauty of the windows for the continued pleasure for the viewing community. The tempered glass covering the windows is not sealed. There are gaps engineered at the tops and bottoms of each window to promote air exchange and to prevent condensation from accumulating.

Reverend Frank Brush was the church’s minister during the design and building of the sanctuary. While traveling in Italy, he was struck by the beauty of religious stained glass art. He purchased Italian glass and had them sent to Chicago where the windows were painted. Members of the congregation and community, at that time, donated the windows in memory of early church leaders. There are fourteen large windows five feet by fifteen in the main building. Ten of these are figured and four unfigured. Early Alamedans remembered in the windows include Rodney L. Tabor and Edmund Y. Garrette, former pastors of the church. Also remembered are Sarah Hastings and Caroline Webster.