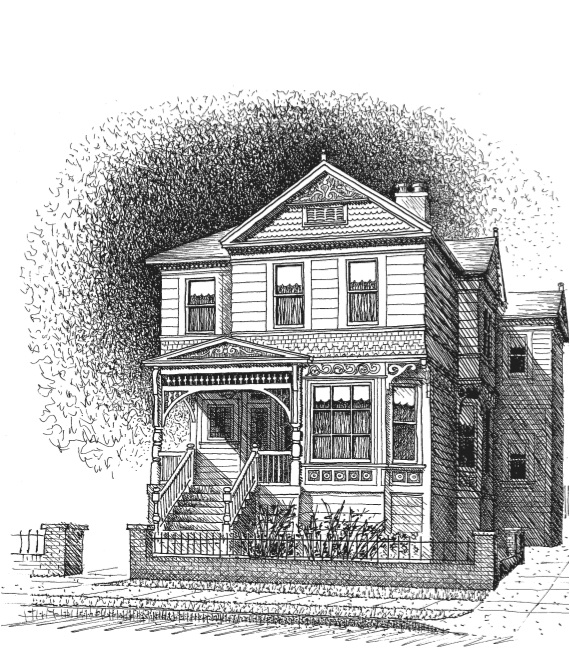 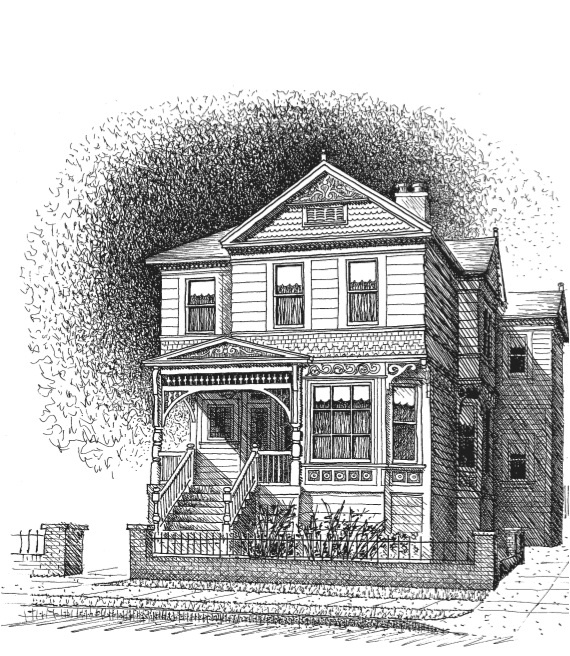 “In the Spirit of Joseph Leonard”

Sometimes restoration projects start modestly and then expand as the innards of the structure are revealed. Movements of the earth may also come into play. Both events, the unforeseen and the unpredictable, influenced the major renovation and alteration project completed at 2067 San Jose Avenue.

Owners Bruce Gilliat and his wife Jean Graham told their tale. “Bruce and I were dating in 1987 when I lived in San Francisco,” Jean related. “Bruce bought this house in December of that year, and I came to live in Alameda when we married in 1990. During the 1989 quake, the building was severely damaged when the entry pillars lurched to the ground. So we knew the house needed seismic upgrading and repairs.

“The house had been stripped of all its original architectural detail in 1936 and covered with asbestos siding. Previous owners removed the asbestos, but the house was still naked. So we wanted to restore the Victorian character of the Joseph Leonard design, plus we had all this seismic damage to correct. We hired Bruce Bollinger as our architect because of his sensitivity to preservation of historic architecture. We needed information about the original embellishment, so we went to George Gunn, Curator of the Alameda Museum, who searched with no luck. In Woody Minor’s book, The Leonardville Heritage Area, we found information about the architect, and we also found a house similar to this one on San Antonio Avenue. We mined that façade for ideas restoring the details to this building.”

Bruce related how minor construction became major. “We worked on the plans with the architect, submitted them, and got our approvals from the city. We began with a small project: seismic upgrading, replacing the front pillars, and adding a master bedroom and bathroom upstairs. That first week a city inspector came by and said, “I don’t like the bricks underneath that house; it needs foundation work.”

He went on, “We had to do foundation work to support the second story addition, and that’s when we found concrete encapsulating brick. So we decided to bring in the backhoe, jack up the house, and build a new foundation.”

They started the project Thanksgiving weekend 1992, and the contractor left by the summer of 1993. Then Bruce took over with various friends, “including a professional plumber to keep me out of trouble. When we put the house up on its new foundation, the lath and plaster walls on the inside were damaged. I got a bid that said if I removed all the lath and plaster myself, they would drywall the entire house for the cost of fixing the plaster. So weekends and evenings, room by room, we ripped out lath and plaster.”

Then their architect said, “What an opportunity you’ve got with all the walls open!” So they re-did the electrical service and the plumbing, as well as completing the seismic work. The only original part of their house is the skeleton—balloon framing, hardwood floors and joist supports. Everything else has been completely refurbished. Bruce isn’t certain exactly how much the project cost. “I’d say at least $300,000 because we did some of the work ourselves, but if you paid somebody to do it all, the amount was probably in the vicinity of $500,000.”

While the work was going on, both Bruce and Jean were pursuing demanding careers. Jean managed the Voice Mail Services Center for Pacific Bell, and Bruce was Vice President of sales for a fiber optic company in Massachusetts. Bruce recalled, “I commuted to Boston on Sunday nights and came back to Alameda on Friday afternoons. The contractor and I discussed the project on the phone in hotel rooms all across the country. When we were thinking about re-doing the lower floor, I as at an airport Ramada Inn. We were noodling about the best height for the ceilings in the basement, and they needed a decision that morning. So I went down to the front desk, borrowed string and thumbtacks, measured seven feet up on the wall in my hotel room and walked back and forth under the string so I could visualize the effects.”

Bruce had lived in Alameda since 1980. “When I bought this house in 1987, I wasn’t necessarily set on a Victorian. I was trying to buy my first house in the Bay Area, and I was drawn to this property by the price. I realized that it needed some work, so I started out with small projects. Then the earthquake two years later made total renovation necessary, as well as practical.”

Jean filled in some history of the home. “Two older sisters, Margot and Mabel Melling, lived here together for many years. When the surviving sister, Mabel, was eighty-six years old, she fell down the stairs. She called a retirement home and said, ‘Come pick me up, it’s too dangerous here.’ Her family back East sold the building for her; it hadn’t been touched for years so all the good 19th century stuff was still intact. However, the people who bought it in 1986 wanted to modernize, so they stripped and discarded everything that was Victorian—the medallions, the pocket doors, the bookcases. So when we bought the house, we spent a lot of time replacing what had been removed. I researched the medallions and cornices, and then we hired San Francisco master plaster caster Lorna Kohlmeyer to redo decorations inside and outside, including the floriated decoration up in the peak of the gable.”

Jean explained their extraordinary effort to recreate the Victorian atmosphere of their home. “I’m interested in historic architecture, and I researched the original qualities of the building to make our restoration authentic and our addition compatible. Our architect shared those same values. Even though we had no original pictures or plans, guidance from Woody and George and others helped to ensure the compatibility of our work with the original spirit of Joseph Leonard from the Victorian era.”