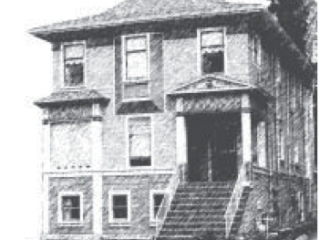 When T.R. Draper built 2107 San Jose Avenue in 1898, little did he know the many transformations the house would undergo over the next 100 years. As for the current owners, mother and son team Nicky and Steve Broderick, little did they know the daunting task that lay before them to bring the Colonial back to life.

When Nicky and Steve purchased the house in March 2001 one could say they purchased it sight unseen. The house had been encapsulated many years previously with the infamous asbestos shingles and no one knew what lay beneath. The house was originally a single family residence, and T.R. Draper apparently lived here for awhile. During the 1950s, the house was split up into several rental units and an attached cottage added to the rear of the house. After buying the house the Brodericks initially moved into the cottage even though it required substantial work.

Nicky and Steve’s primary objective was to restore the exterior of the main house. The renovation began in April 2001 with the installation of a new roof which required removal of several layers of composition shingles as well as the original wood shingles. An architectural grade composition shingle roof was installed over plywood sheathing.  Next, the unsightly asbestos siding that had covered the house for half a century was removed in less than a day, but what a mess. However, there were surprises, some good some not so good.

A considerable amount of the original redwood molding around the windows and the front porch had literally been hacked off. Huge gaping holes were everywhere. The good news however somewhat balanced the bad. Original dentil molding under the eves and the original checkerboard molding was found under the second story bay window. Remnants of the original unique decorative panels were found hidden under the asbestos siding above the large windows as well in the front porch gable. Unfortunately the design elements were so severely damaged due to application of the asbestos siding, nothing was salvageable except the design concept itself. 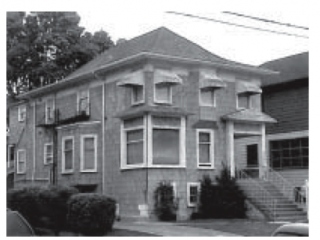 As the renovation progressed from one stage to the next, close attention was paid to details and the architectural style of the house. Nicky contracted with local Alamedean, Dean Bally to replace and repair all the molding. Bob Buckter, an architectural color consultant, designed the paint color treatment. A total of seven colors were used. A subtle but striking mix of grays, greens, creams, mauve and real gold leaf was chosen and the new trim and borders show beautifully. Nicky could often be found perched on the scaffolding hand painting the gold leaf and decorative lincrusta panels above the windows and front porch gable. She sometimes had to be helped getting up and down since being up so high was not her favorite place to work.

The monumental task was difficult and required much diligence, but the Brodericks say it was worth all the time, effort and cost. 2107 San Jose Avenue has again become a great asset to the neighborhood and the City of Alameda and its stunning new look will be appreciated for many more years to come.