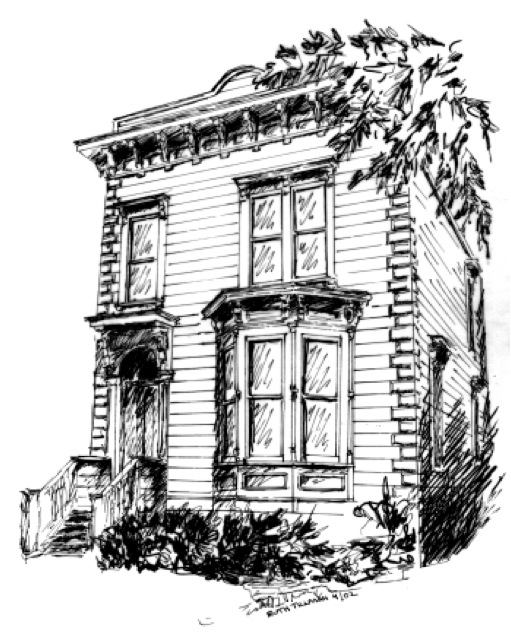 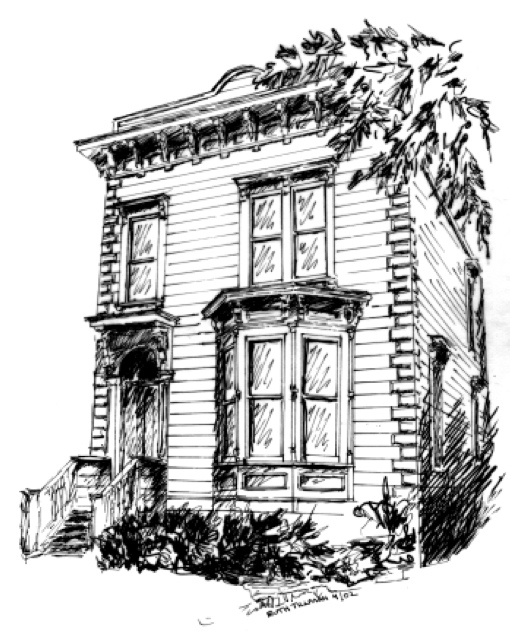 At about 11:00 PM on September 2000, Pat Payne was awakened by the shouts of her neighbors. Her house was on fire but her smoke alarms had not gone off because the fire had started outside the house in debris left by her roofing contractors. The fire had been sucked into the house through an exterior vent and since her 1873 Italianate had few fire breaks, every six inches of interior wall space acted as a chimney sucking the fire up through the walls straight up to the roof. The house was almost a total loss from the gutters up and water damage ruined the rest. 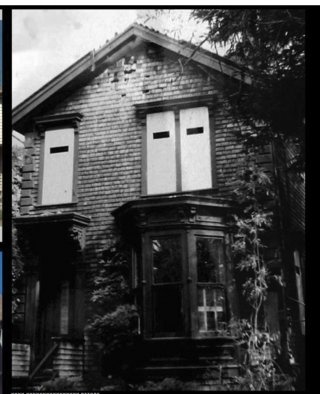 Since Ms. Payne had faithfully paid premiums to the same insurance company for 30 years for full replacement value, she assumed she would have no problem restoring her Italianate. She had understood that insurance is supposed to replace what was there and you can rebuild any way you want with the money. And although the shock of losing her beloved home was considerable, she didn’t realize that the struggle with her insurance company to get full replacement value would be almost as bad. This was also the worst time to find a decent contractor since all were busy from two to five years and most lacked the thing a Victorian needs most, a great trim carpenter. She finally found Westwind Builders through Jim Spalding—a great trim man. She was forced to stop working and instead spent 7 days a week for almost two years to restore her Italianate to its original 1873 splendor.

The 1873 Italianate was originally located on the present site of Stone’s Bicycle Shop on Santa Clara near Park Street. It had been moved in 1902 to its present site at 2121 Alameda Avenue. Sometime in the 1930’s, the elaborate front façade had been modified, losing part of its original woodwork and roofline. Determined to bring her Italianate back to its unmuddled glory, Pat found an early photograph of the original front façade as well as a similar Italianate on Eagle Avenue to help her match the original woodwork and roofline of her home.

Along the way, Pat discovered that there are public adjustors who for 10% of the gross proceeds will represent individuals in the struggle with insurance companies. However, since she had to be at the site to consult on the Italianate design and construction, she decided that she might as well do it herself. Likewise, she discovered from her insurance company that the real present cost of restoring an older home is $300 a square foot; the insurance company was offering much less than that as “replacement value”.

She also discovered some important allies. Haus did the bracket work for her; White Brothers lumber was important in finding original materials, such as redwood siding as well as successful substitutes, such as Cambera woodwork. Finally, Bob Nicol, architect, was of great assistance in ensuring that all the details were correct and speeding the project through the City. Pat was also able to reproduce much of the interior picture rails herself from pieces of the rails that had been saved from the fire. She has decided to replace the exterior roof sprinklers but not install interior sprinklers because if they are accidentally triggered, the insurance company will not pay for damage. An insurance company will only pay for water damage resulting from an actual fire. The sprinklers are to be placed on the upper outside roof to minimize interior water damage as well as protect the roof and the wood gutters from outside fires. They are manually turned on because by the time the heat activated the automatic ones it would be too late.

Pat did discover one fire preventive that is less costly and disruptive than tearing out all the walls and installing fire breaks. She had poured a product called Vermiculite in the West wall of her home because of fire worries and the close proximity of a 4 unit rental and it worked. That wall was untouched by fire except at the very top where it had compacted somewhat. Vermiculite pours down through the smallest openings at the attic and insulates and fireproofs. You just have to make sure any holes at the cellar level are closed off or it will pour out.
Our hats off to Pat Payne for her true grit in restoring her Italianate, Phoenix-like from fire. 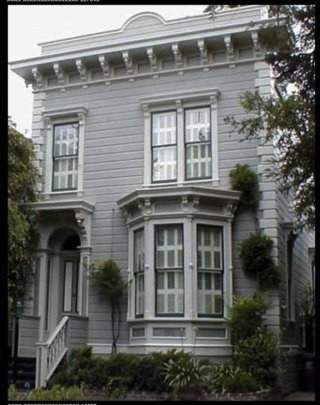