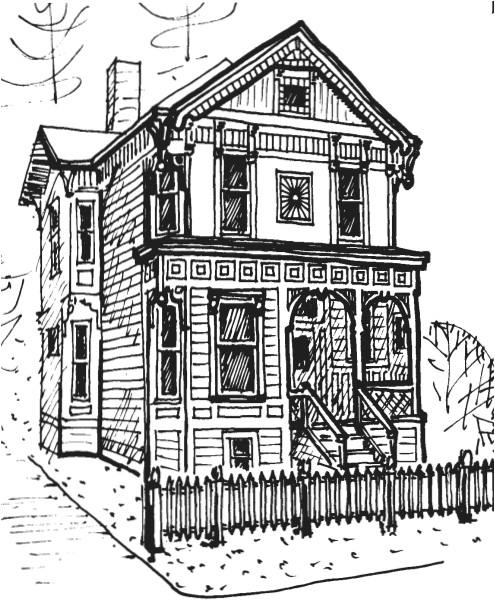 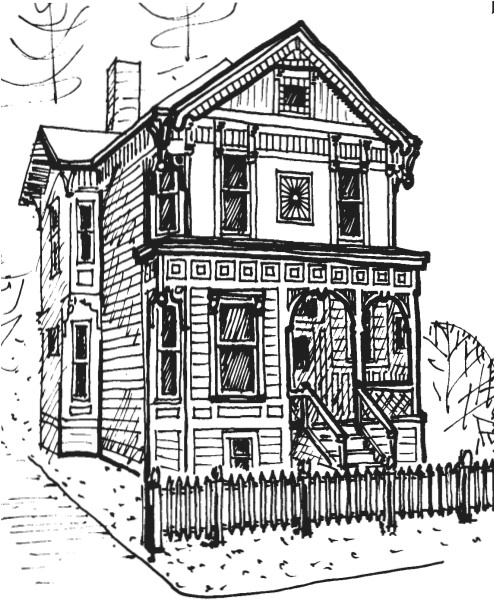 Resuscitation of a Derelict

When William Galli bought 2250 San Antonio Avenue in 1979, the 1889 house had been subdivided into five apartments and was in serious disrepair. The previous owner had purchased the building solely to demolish and replace it with the largest possible apartment building allowed on the lot.

Because demolition was intended, the owner had neglected the property for years; it was almost uninhabitable. Roof leaks ravaged the plaster ceilings, and dripping sewage damaged both the structure and the finishes on the inside. Before he could begin renovation, Mr. Galli worked with officials from the Building Department to bring the house up to an acceptable level of life safety. As he said, “I had fourteen days to bring a down-and-out fire trap to up-and- coming status.”

Shortly after he bought it, Mr. Galli was approached by a local developer who offered to purchase and replace the building with yet another shoebox apartment house. The developer recited the standard negative litany: Rehabilitation would cost too much. Who would finance such a dilapidated structure? The property would be more valuable hosting a higher density building than a five unit Victorian. The neighborhood was already crowded with shoeboxes, so what would another one matter?

Mr. Galli was presented with a classic dilemma: “I had the choice of a derelict Victorian or a Ferrari and a vacation in Europe.” Fortunately Mr. Galli chose the house. He viewed the Queen Anne with respect for its inherent beauty; he valued both the architecture and the history it represented.

Like many who restore old homes, Mr. Galli felt a sense of stewardship, and he believed that such buildings should be maintained and preserved for future generations. “My building does more than just inspire an appreciation of Victorian architecture. My hope is that it creates an understanding of the pleasure of living in a preserved house and builds a preservation activist constituency for the future.”

Mr. Galli invested his time, skills, and money to restore and preserve the architectural integrity of the building. By doing high-quality renovation, he was able to attract tenants of equally high quality. Many of his tenants have gone on to purchase their own Victorian homes here in Alameda.

His work has also served as a catalyst for nearby owners of Victorians to maintain or renovate their properties. This structure is now one of a whole row of formerly deteriorated homes that have been revived and lovingly brightened with fresh paint.

Mr. Galli’s renovation of this historic structure is tangible proof that preservation is an economically viable alternative to demolition and new construction. It is also an example of how a multi-unit building can be visually compatible with a low-density neighborhood, and can even enhance its surroundings.

Just a casual glance at this property shows the aesthetic benefits and sense of community that these old homes provide, compared to the nondescript and uninspiring environment of the dingbat apartments that once threatened to replace them all. AAPS salutes Mr. Galli (AKA Geppetto the Carpenter) for his efforts.