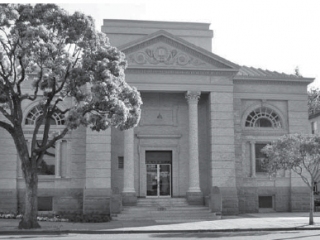 The Carnegie Library building, City of Alameda Historical Monument No. 16, is one of Alameda’s great architectural treasures. It was constructed in 1902 as Alameda’s Free Library, with grant funds from the Carnegie Foundation, and designed by architects Wilcox and Curtis. For many years it suffered deferred maintenance, including roof leaks that penetrated the masonry walls and lead to deterioration of the masonry, and rust and water stains on the exterior surfaces. The building was Alameda’s Main Library until 1999, when the library was moved to Historic Alameda High School to allow for rehabilitation of the Carnegie Building.

In 1996, the City Council initiated a program for the building’s rehabilitation and future use. The program involves four phases: (1) stabilization (including roofing and water-proofing) and seismic retrofit; (2) code and other upgrades to allow first floor occupancy; (3) additional upgrades to allow occupancy of all the floors; and (4) new heating and ventilation systems and other tenant improvements. 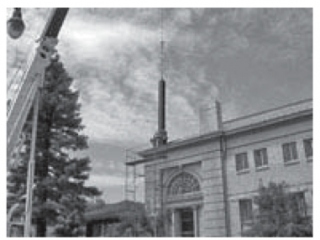 AAPS’s Preservation Award is for completion of the first phase. Although the building is not yet fully rehabilitated and its future use is undetermined, the completed work constitutes almost half of the original total rehabilitation cost (estimated at $5,510,460 in 2000, but recently revised to about $8,000,000) and represents a definitive commitment by the City to the building’s preservation and ultimate restoration.

The award is being presented to the City of Alameda; project architects Muller and Caulfield; historic architect Alan Dreyfuss, AIA; and contractors Aztec Consultants. The award recognizes the commitment to the building and the very sensitive approach to its rehabilitation, which resulted in minimal visible alterations to the building’s significant architectural features and improvements to the appearance of the exterior by cleaning the masonry walls and installing new landscaping.

Significant work elements included:
• Installation of concrete shear walls and eight massive steel columns, supported by 50’ deep micropiles. The columns were inserted through the roof (see accompanying photo) and, along with the shear walls, are either concealed inside the existing walls or within visually unobtrusive extensions of these walls.
• Installation of steel beams hidden in the floors and ceilings and connected to the new columns to create rigid structural frames.
• Construction of plywood diaphragms at the base- ment and first floor ceilings to increase resistance to seismic forces.
• Walls and installed from the inside so as not to affect exterior appearance. 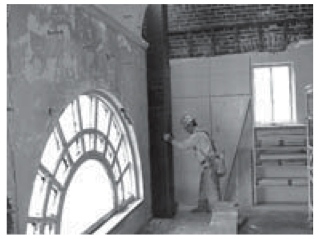 • Cleaning of all exterior brick, terra cotta, stone and other masonry surfaces and repointing masonry joints, where necessary.
• Repair and replacement of cracked, loose or spalled exterior sandstone (mostly at the basement level) and application of a consolidant to prevent future deterioration.
• Painting of all exterior wood and metal surfaces (such as the main cornice).
• Replacement of the entire roof and both skylights in-kind.

An important note on the plans states “Where removal of existing materials or finishes is required for performance of any work under this contract, removal and replacement to match original shall be accomplished whether specifically indicated or not, unless otherwise noted.”