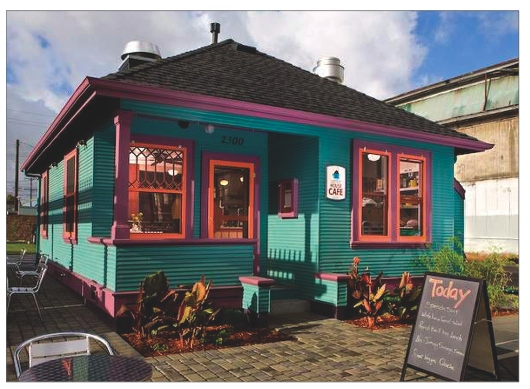 What Moves, Grooves! A Software Company Fuels its Enterprise and the Neighborhood with Good Eats

In 2005, Christopher Seiwald, President and Chief Technology Officer of Perforce Software headquartered in Alameda, wanted to add a geographically desirable savory experience for his employees. To optimize the combined need of Perforce’s growth requirements and add the dining component, Christopher founded Down on Blanding LLC, and purchased Olsson’s Plumbing & Heating property next to Perforce. The property provided adequate space for expansion, and contained a little old house he thought would convert nicely into a cafe and the idea for the Little House Cafe was born. The goal was to preserve the historic home and convert it for modern use as a quaint eating establishment.

The to-be Little House Cafe started out as a small 648 square foot Colonial Revival residence, built in 1904. At purchase, the home was in what is best described as “miserable shape”, but boasted great bones and desirable architectural detail. The Cafe conversion project was immediately turned over to Perforce’s creative duo, Carrie Ewing, VP of Operations, and Kelly Day, Project Coordinator, and Buestad Construction. On September 17, 2007, the Little House Cafe opened its doors to an around-the-block line of eagerly waiting new customers. The resounding success of conversion is something to admire and celebrate.

The process began with moving the home to the optimal location, on the corner of 2300 Blanding Avenue at Oak Street. The move was orchestrated by Mike Roger’s House Moving, who shored the house, knocked out the first floor walls, lowered the house, rotated the house 90 degrees, and pulled the house forward to Blanding. The house was lowered onto the new foundation, a mere 30-days on the timeline. 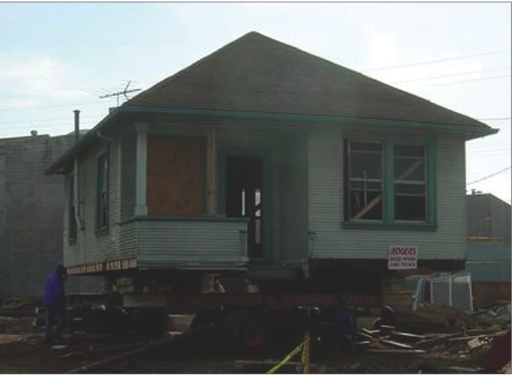 Carrie and Kelly wanted to maintain and enhance the interior and exterior true to the original Colonial Revival cottage style. They paid extraordinary attention to detail, color, texture and tradition– from wallpaper (especially Trustworth Studio’s Bat and Poppy wallpaper in the bathroom), trim, flooring, doors, windows and lighting. Aluminum slider windows were changed back to the original wood double hung windows, a jacked-up basement addition was removed and the front porch restored. 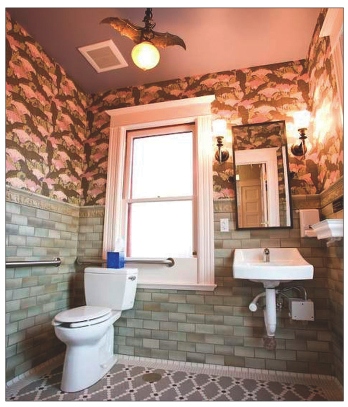 The challenges of converting the residence into the cafe went way beyond the design, and decorative preservation and restoration. A whole set of standards and requirements from the Alameda County Health Department needed to be met. Restaurant ownership comes with a big responsibility: making sure that the food is always fresh and the environment is clean. The requirements were arduous, given the Little House Cafe’s ‘little square footage’ with which to work. But determination and creativity achieved the City and Health Department’s sign-off.

Many Perforce Software employees and neighbors eat at Little House Cafe every- day and love the food! A little secret…besides the good food, and WIFI access, the cafe is a charming, better- than-new establishment. There’s also outdoor seating and parking.

The project is an outstanding example of preserving a small building that many developers would have considered in the way of their development project. Mr. Seiwald and his Down on Blanding, LLC. are to be commended for not only preserving the building for creative adaptive reuse as part of Perforce Software’s headquarters expansion, but also for a very sensitive restoration of the building in the process. The Alameda Architectural Preservation Society is delighted to award Down on Blanding, LLC, Perforce Software and Buestad Construction a 2008 Preservation Award for their topnotch, concept-to-finish, reuse and restoration wonder, the Little House Cafe.