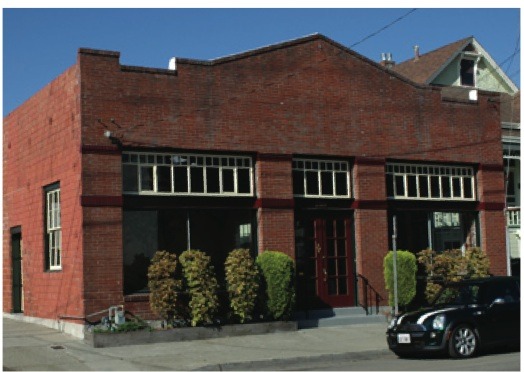 Most long time Alamedans think of 2310 Clement as “J and J Plumbing” and to some later as “Bobcat Plumbing”.  The building was originally built for Joseph T. Cavanaugh in 1924 as the Cavanaugh Overall Laundry and Supply Company, which supplied the laundry needs of the shipping industry along Alameda’s north shore.

An active builder in Alameda during the 1920s, Myron H. Fish, designed and built the structure for $5,000, leaving his signature peaked parapet treatment seen in his work throughout the city. The wood framed construction features inlaid brick.  The front façade material is dark red standard brick but the remainder is a rare hollow tile terra cotta brick.  Unfortunately, at one time some of the hollow tile was painted and current owner Bill Emberley is in the process of removing that paint to expose the original surface.

Mr. Emberley is a lifetime restorer beginning in his youth fixing and painting the homes of his parents’ friends as a way to earn money.  He began Edit One, his video production company, in a San Francisco building that housed the first brewery and slowly restored the building into habitable space to lease.  In 1995, he moved his family to Alameda and bought a Queen Anne to restore while he looked for warehouse space in Alameda to house his company.  In 2002, he heard about the building on Clement and made an offer on it before it went to market. 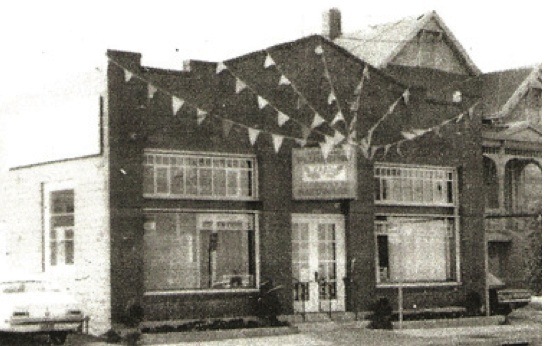 It is often said the lack of money helps the preservation process because people don’t have the resources to “muck things up”.  Bill Emberley’s restoration philosophy is born of this circumstance. Rather than hiring someone to come in and quickly rehabilitate a space or structure and/or using Home Depot like materials, he thinks of a project as an “archeological dig”.  He is in no great rush and takes his time to restore and preserve to ensure a 100 year old building will remain a work of art 100 years from now.  The old laundry building on Clement is no exception and he looks to it as his “legacy” (and last) project.  The boarded up windows have been replaced or restored one at a time over the period of eight months.  When possible, he restores the old rather than replacing with new and works with what is there. “If wood has divots, it adds character”.

The front of the building at 2310 Clement is nearly complete inside and out and the rear half remains a work in progress.  One of the final touches planned for the front is to replace the original sign painted on the east side of the building that can barely be seen on the hollow tile brick.  The sign will once again say, “Cavanaugh Overall Laundry and Supply Co., Inc. JT Cavanaugh”.