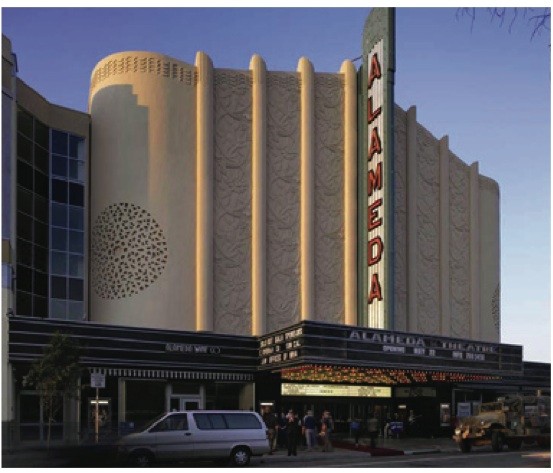 The historic Art Deco Alameda Theater is convincingly the most distinctive building in Park Street’s downtown. When first opened in 1932, the Theater had one of the largest screens in the Bay Area and was the most exuberant theater within the City of Alameda. The grand scale effort of this theater transformed Alameda as a predominant “theater destination” in the greater Bay Area.
The Alameda Theater was designed by the renowned San Francisco architect, Timothy L. Pflueger, who designed the eclectic Castro Theater, in San Francisco, in 1922 and the elaborate Paramount Theater, in Oakland, in 1931. The Paramount and Alameda Theaters were the first Depression-era buildings to incorporate and integrate the work of numerous creative artists into their architecture and their successful orchestration of the various artistic disciplines into an original and harmonious whole. The Alameda Theater’s exterior incorporates deeply incised and intricate Moorish Revival rosettes on cream-colored smoothly curved sides of Art Nouveau flowers in bas-relief rising between eight vertical Moderne speed lines. The Art Deco interior design used imitation silver and gold leaf for accents and warm colors for a stylized mezzanine mural with a hint of Cubism. In the interest of economy, the Alameda’s floor plan was nearly identical to that of the El Rey Theater, in Los Angeles, including twin curved staircases, and some floral and geometric elements were adapted from the Paramount Theater.

A number of Alamedans still remember the Alameda Theater’s opening day, August 16, 1932. This event hosted 5,000 guests for its dramatic Grand-Opening night, with the lobby’s glittering lights and grand Art Deco style, and usherettes in classy, colorful costumes. The guest of honor was California Governor James Rolph Jr., who dedicated the theater. Governor Rolph applauded the Nasser Brothers for building a grand movie theater in Alameda at the height of the Great Depression.

The Alameda Theater was the last great movie palace built in the Bay Area. Alameda’s 35,000 residents had plenty of theaters—the Strand, the Rio, the Vogue, the Park and the Neptune—but they didn’t have a true movie palace until the Alameda Theater with 33,400 square feet, 2,200 seats, and one of the largest movie screens in the Bay Area. The theater was a grand Art Deco attraction featuring sculptured wall reliefs, elaborate light fixtures, intricate metalwork and gilt-framed mirrors, complete with a vertical blade sign that soared 70 feet into the sky with “Alameda” in big capital letters. The theater was built in 14 months at a cost of $500,000.

After decades of success, the screen went dark in 1979 as a result of declining attendance. Since then, its cavernous hall has housed a number of businesses, including the Yankee Doodle roller rink, a gymnastics setting, teenage dance clubs, and then it almost became a chain pizza restaurant for kids. Allen Michaan, the restorer of Bay Area movie theaters and owner of Oakland’s Grand Lake Theater, led a campaign to save the Alameda Theater and later tried to piece together a deal to reopen it. Michaan was unable to get financing from the City or a bank, so he gave up in the late 1990s. 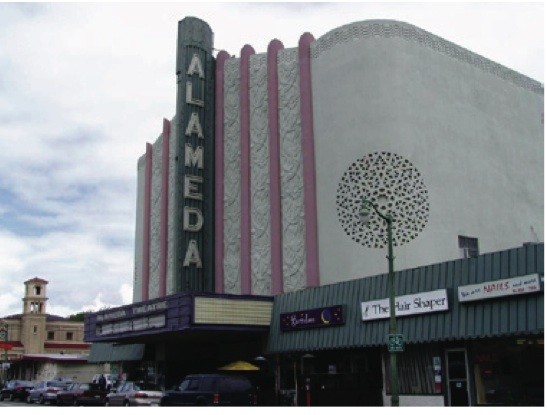 In 2003, the Community Improvement Commission of the City of Alameda (CIC) issued bonds through a reorganized redevelopment program, which rendered the theater renovation project both feasible and desirable. The real work of revamping the theater to its former splendor began in earnest in November 2006. The CIC headed up the restoration project, restoring as much of the building’s original elements as possible while also adapting the theater to the needs of a modern cinema. Because the theater restoration was partly funded with federal money, the work was required to conform to the Secretary of the Interior’s Standards for Historic Preservation Projects.

Much of the exterior of the building has been restored, with the marquee and storefronts returned to their original character. The budget for the renovation totaled $15.5 million, with roughly 70 percent of its hard construction costs for structural, mechanical, electrical, plumbing and other code requirements. Besides the CIC, the restoration team consisted of

Together this group accomplished an outstanding restoration effort. As highlighted in the photo, the Alameda Theater auditorium once again houses a single screen theater with 750 seats, including balcony seating. The comprehensive rehabilitation efforts of the auditorium include:

In addition, there were three major modifications necessary to accommodate the programmatic needs of a modern cinema: 1) an expanded ticket booth in the entry foyer, 2) a new concession stand (installed under the existing balcony), and 3) stadium seating installed in the theater auditorium. Kyle Conner and his company, Alameda Entertainment Associates, operate the restored Alameda Theater.

Conner is an independent movie developer and operator who has made the movies his life’s work. He first worked in a movie theater as a 14-year-old in his native Salt Lake City and has spent the past 25 years in the business. Conner is no stranger to Alameda. In the mid-’90s, he managed Lippert Jr.’s Southshore Cinemas when he worked for North American Cinemas of Santa Rosa. In 2001, he went into business for himself. He found out about the City’s plan to restore the old theater and had his initial meeting about it in the summer of 2001. “It’s a life-altering commitment for me. I’m very excited.” On the exterior, the blade sign has been restored and repainted, as have the marquee canopy, and the black-and-white-striped awnings have been put up to match the originals. Automated ticket booths on either side of the entrance replace the old ticket booth. Being the theater’s most richly decorated room, the lobby hosts much of the restoration work. The lobby’s coffered ceiling and plaster floral designs have been repainted in silver and gold Dutch metal leaf to match the original. The original chandelier’s 180 etched glass panels have been cleaned, restored and/or replaced. Two of the lobby’s original chandeliers were somehow removed from the theater after it closed, but were anonymously returned and now opulently hang in their place once again. The lobby’s twin torchieres have also been restored. The grand auditorium features new acoustical panels, which have been wrapped in fabric to match the original painted wall colors. Most of the original curtain has been restored. Another true treasure in the lobby is the Hippocampus, known as the Mermaid’s Horse, a mythical, beautiful, and majestic ocean steed. 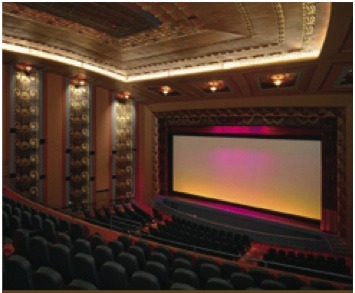 As the Paramount and Alameda Theaters shared many of the same original finishes and details, the restoration team adaptively worked with the Paramount curators for references and recommendations to create the best of the old and the new when the theater reopened in 2008. Experiencing the restored Alameda Theater is perhaps best stated by a Yelper’s review: “The Alameda Theater is absolutely beautiful. It is so much fun to walk in and feel like you are going back in time. The refurbishment of the Art Deco Theater was done expertly and accurately. It is great fun to go to see a movie in the original theater—especially on Friday night.”

In summary, the exquisite Alameda Theater restoration is the result of four key ingredients working in complementary fashion: 1) a terrific team, 2) thorough research, 3) continued cooperation, and 4) a complete dedication to artistry, quality and detail. We sincerely acknowledge and thank the City of Alameda, Architectural Resources Group, Alameda Entertainment Associates and C. Overaa & Co. for their excellent restoration work on re-establishing and opening this historic Alameda treasure.