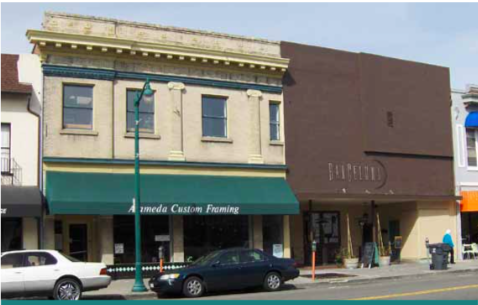 This diffident storefront appears as unassuming as its mercantile history is important. More than a century before the inauguration of the innovative Park Street Market Place—many vendors under one historic roof—owners of this City Market Building initiated the idea.

When it opened to acclaim and fanfare in 1908, the City Market was a single building on two parcels of land, 2317 and 2319 Santa Clara, and the design by architect Albert W. Cornelius included a decorative cornice and pilasters marching across the entire front. The opening gala of the market February 7 1908 included a “concert by Boxberger’s Orchester (sic),” according to the Alameda Argus, and the public was invited to “witness the many new wrinkles and late improvements.” The basement level had a smoker for meat, ice machines, and huge refrigerators to store the meat, produce, and seafood described in a series of ads in the Argus. “Thousands thronged” the establishment, which the newspaper declared “the finest market about the bay.” There the vendors thrived, purveyors of oysters, soap, smoked and cured meats, coffee, baked goods, and much more, until around 1940 when the City Market went dark. Always in dual ownership, the structure was then partitioned into two stores; upstairs were rooms to rent in 2317 and offices in 2319.

The “twin” at 2319 Santa Clara suffered a stucco attack in 1954, when it was shorn of anything harkening to the original design, and its surface was smothered, rendering the front both smooth and faceless. Its integrity was so “severely compromised,” that the place could not even qualify as a background contributor to the Park Street Historic District where it is located, according to historian Woody Minor. One of early tenants of the modified 2319 storefront was Arthur’s Furniture and Appliances, whose five brother-owners crowed, “Progress is our middle name.” 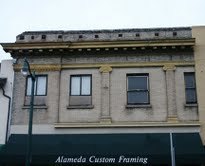 The fate of 2317 was gentler; the ravages of time and weather rendered it shabby, and a section of the brick cornice plummeted. The two upper left hand windows, originally wooden guillotine in style, were replaced in the 1970s, according to owners Chris and LaVonne Museo, by shorter sliding aluminum windows. “Young children were living upstairs, and the smaller openings made the unit safer for them,” Mrs. Museo said. “We filled the remaining holes below the panes with plywood covered by brick patterned contact paper.” 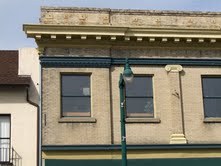 Enter Sue G. Russell, who manages the Façade Assistance Program under the auspices of the City’s Economic Development Department. Russell worked with the Museos and prepared a detailed list of tasks to renovate 2317, “in keeping with the goal of the preservation of twentieth century commercial architecture.” According to specifications, Oakland based contractor Kesete Kifle repaired the cornice and the parapet, gently cleaned the soiled brickwork, and replaced the two modernized windows on the upper story with new ones from the Marvin Company. Learning that his work would be singled out by AAPS, Kesete said, “I enjoy working in Alameda. Down the block from 2317 Santa Clara is another of my projects, Paul’s Newsstand.”

Describing his work, Sue said, “He did an excellent job restoring the torn building wall and labored extensively to clean the brickwork. He took great pride in the project and truly put in extra effort.” Completion of these jobs, along with a new paint scheme, brought back some of the flavor of the original City Market Building.