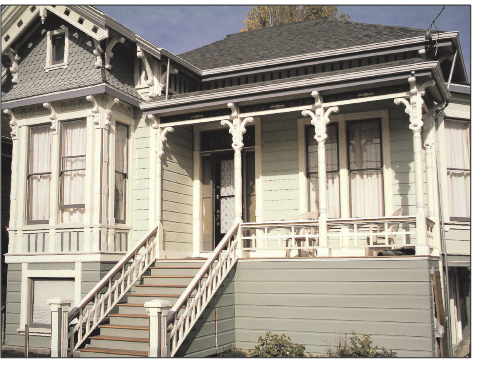 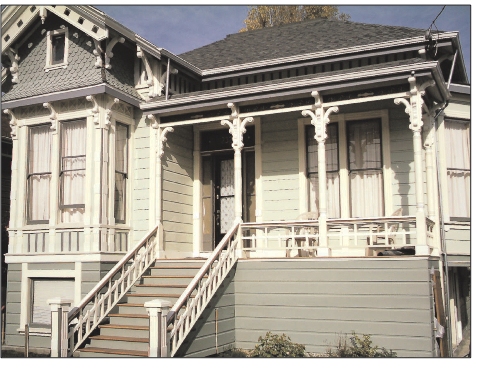 What’s Under that Stucco?

In 2004, Ken Lund was negotiating a mortgage deal for the buyer of a house at 2323 Buena Vista Avenue in Alameda. At the last minute, the deal fell through and Ken decided to purchase the property himself with the notion of bringing the building back to its original state.

The high basement Eastlake cottage was constructed in 1885 by Denis Straub and A.C. Gilbert for Captain James Hansen. Hansen owned the lot to the west, as well as the 3 lots behind, facing Eagle Avenue. Both Buena Vista houses were built in the Eastlake style while the Eagle Avenue houses were constructed later in a Queen Anne style.

By the late 1970’s the house had acquired a new look. The lower level, front porch and stair balustrades had been encased in plywood and covered in stucco. The high basement had been converted to two rental units. The back porch had been enclosed and turned into additional rooms, which proved to be in various stages of decay. The yard boasted a carriage house and driveway, which had originally been part of the adjoining property, plus a block building used as a car repair shop in the 1940’s. 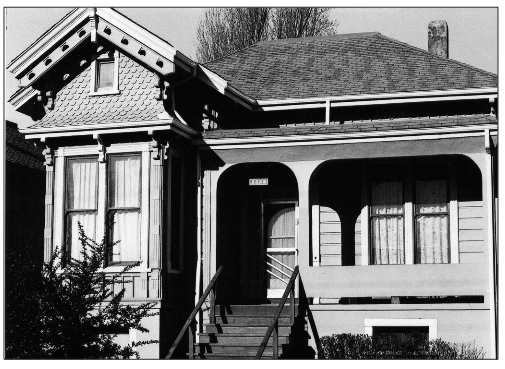 The first step taken was removing the 12 feet of additions from the back and the pink painted stucco. Once the stucco was removed, many of the original ornaments were found intact and patterns for missing pieces were visible. For reference, an almost identical Eastlake cottage by the same builder was situated next door.

Carpenter Stuart White handled restoration of the ornaments. All were restored or duplicated. The center porch post was completely missing. A piece of clear heart redwood was supplied by a friend, then turned on a lathe to recreate it. Sections of the porch rail were salvaged and copied for the new balustrade on the stairs. The porch floor that had been covered in concrete was removed and replaced with planks.

Twelve wood window sashes were stripped and sanded. The sash weights were replaced and they are all fully functioning. The roof of the house was reshingled and the attic insulated. A brick chimney in the kitchen wall was removed where a partially burned newspaper from the day before the 1906 earthquake was found sealed inside.

Jesse Garza painted the house after stripping all the exterior wood. Ornaments were removed, stripped and numbered so they could be replaced by using a detailed guide. After some negotiation between the painter, Ken and his wife, Laura, 11 colors were used in a muted traditional color scheme with special attention on the detailed woodwork. Jesse insisted on hand painting the intricate shapes on the front of the house himself.

After demolishing the additions on the back, removing the interior of the rental units and the stucco, the house was found to be sitting on a capped foundation in front, but a brick foundation in the back. Contractor John Hanahoe was hired to excavate and pour a new foundation. John dug the 33 x 66 x 5 foot deep trench with a shovel.

The interior of the house has retained many of the original features including an Eastlake style fireplace mantle and two stained glass windows. However, details in the trim and ceiling medallions had been covered with plaster or layers of paint. Most of the ceilings were removed and sheet rocked, especially after Ken stepped through a couple. The ceiling medallions are in the process of being stripped. Ken estimates that 400 hours of work was done in restoring the ceiling medallion in the parlor, which was painted by his son.

The sliding parlor doors should be working soon. The newspapers from the Korean War that had fallen into the wall pocket causing the doors to jam, have been removed.

I drove by this house almost every day and looked at that pink stucco and thought “What a shame. That poor house is so far gone no one will ever have interest in fixing it.” I’m happy to say I was wrong and would like to thank the Lund family and all the craftsmen involved that have done a great job on this restoration.