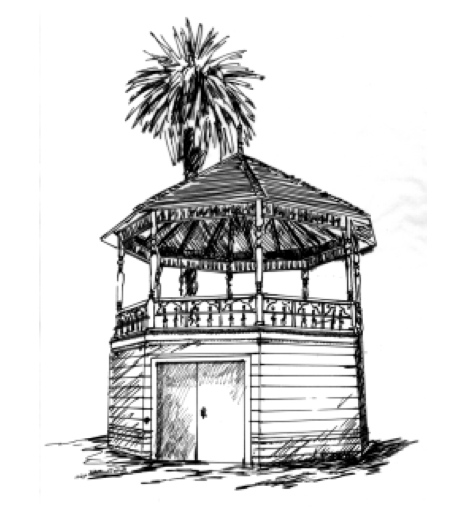 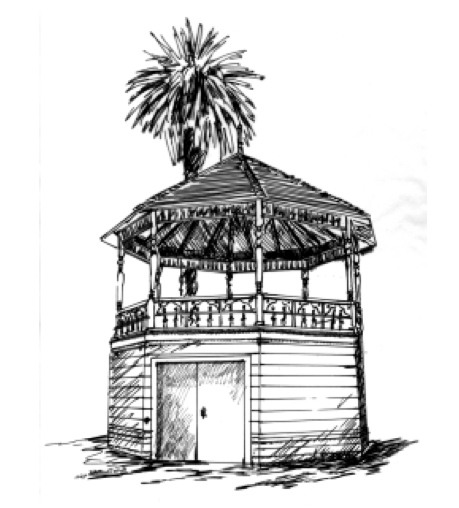 The Jackson Park Bandstand restoration is an outstanding example of a seemingly far-fetched public project that was achieved through a combination of persistent community determination; a clear vision; a responsive and sympathetic city staff and design team; and a supportive Recreation and Parks Advisory Commission and City Council.

Jackson Park, originally called Alameda Park, is Alameda’s oldest park and retains the highest degree of historic integrity. The bandstand was erected in two weeks in 1890 at a cost of $200. It is Alameda’s oldest park building and oldest surviving municipal building. It was designed and built by Joseph A. Leonard, one of Alameda’s leading nineteenth century builders, architects and developers.

The most significant part of the restoration was reconstruction of the missing columns and railings, which formed the bandstand’s main level. These elements had been removed, probably in the 1920’s or 1930’s, resulting in the conical roof resting on the solid-walled basement level, making the structure look like a truncated silo. The replacement columns and railing designs were based on old photographs of the bandstand, surviving physical evidence and analysis of column and railing treatments on other buildings by Joseph A. Leonard.

Additional elements of the restoration were handicapped accessible restrooms, a new foundation, structural reinforcement, repair and replacement of damaged siding, a new wood shingle roof and restoration of the missing finial at the peak of the roof. The finial is an exact reproduction of the deteriorated original, in the possession of the Alameda Museum. The Museum acquired the original quite fortuitously. The city had it removed, probably around 1980, because youngsters were lassoing it with ropes to create improvised swings and the city considered the situation hazardous. The employee who removed the finial, Fred Krueger, kept it in his yard for a number of years, then brought it to the museum.

The bandstand’s restoration allows it to regain its original role as the centerpiece of the park. The structure’s elegant and delicate proportions and detailing and beautiful new paint scheme give it a very striking, jewel-like quality. The restoration was central to the Phase I Jackson Park Renovation Project that was spearheaded by the Jackson Park Neighbors – a group of surrounding residents led by Pete Halberstadt. For years, the Jackson Park Neighbors had been urging the city to improve the park and address long-term neglect. In response, the city hired a consulting Landscape Architect, Jim Hemmann, to develop a park Master Plan. The Master Plan initially proposed demolishing the bandstand and replacing it with a new gazebo-type structure. At AAPS’s urging, the city’s Park and Recreation staff, under the leadership of former Director Sherry McCarthy, recommended that the historic band-stand should instead be restored. The Parks and Recreation Advising Commission and City Council concurred.

As project designer, Jim Hemmann, was especially helpful. He meticulously examined surviving physical evidence of the missing columns and railings, accepting numerous AAPS suggestions on the design details. Ken Carvalho of Buested Construction, served as a consulting cost estimator for the city, provided major assistance in photographing other designs by Leonard, arranged for replication of the finial and facilitated resolution of numerous design and construction issues.

Finally, Pete Halberstadt and the Jackson Park Neighbors continued their efforts to make sure that the project was realized and the Friends of the Parks Foundation contributed $5,000 towards the effort. The contactor was Nema Construction in Albany.