Transforming a former industrial building may seem like a common occurrence these days, but what was required for Janet Koike to turn the Clamp Swing building into a community cultural arts center and work/live lofts—while preserving the historic integrity of its architecture—was no small feat. Removal of lead paint was only a part of the work undertaken since 2003 when Koike bought the building that was the site of a price tag holders company going back to the 1920s.

Most everything the eye can see, and much that is not visible, has received attention during the scope of work, including the foundation. The foundation presented the most challenging endeavor, and was a surprise project in the process of transforming the building. Because of the structural condition and age, coupled with the fact that it was built on landfill, the whole facility started to creak and windows were popping out with the building’s movement during this work. The team quickly responded by shoring up the building with huge pieces of lumber.

An unknown aspect of the building discovered when the project was launched was the condition of the roof. After opening up the ceiling, it was discovered that it had been damaged in a long-ago fire, requiring the replacement of the whole roof. While this was an expensive set-back to the project, the result is a gorgeous wood beam ceiling that now runs throughout the whole top floor and really shows itself off in the theater room where the beam ceiling curves over the expansive space now used for performances, dances and classes. 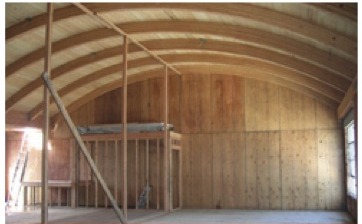 Careful attention was given to retain the industrial look of the building. For example, concrete strengthened with rebar was used on the façade between the garage doors, but only after every brick was carefully removed, cleaned and then later put back in place to surround the rebar and concrete. The result is a stronger structure with no visible difference from before.

Other improvements comprise the addition of radiant heated floors throughout the building, an ADA lift connecting the two floors, and landscaping including a wrought iron fence at the perimeter of the property.

Considering the amount of work done, it is a testament to the quality of that work that the building’s legacy is still felt and seen today. Case in point, the Alameda Rug Works sign painted on the side of the building has been designated an historic landmark, and has therefore been left intact to remind all who pass by that Rhythmix Cultural Works is in fact the third use of the beautiful industrial building on Blanding Avenue.

Today, the old Clamp Swing building has new life as a community art center with a gallery, theater and classroom and the first work/live lofts permitted by the city of Alameda. It serves as an example of successful adaptation of an historical industrial building in Alameda, paving the way for others. As Koike noted on a recent tour of the building, “We really wanted to keep the feeling of studios and industrial workspace. We put our soul into this project, and that’s why it remained a special building—you can feel it.” Rhythmix Cultural Works is a superb example of adaptive reuse, taking its place in Alameda’s community in large part because it maintains the architectural integrity of the past while providing a highly functional, modern space for art.