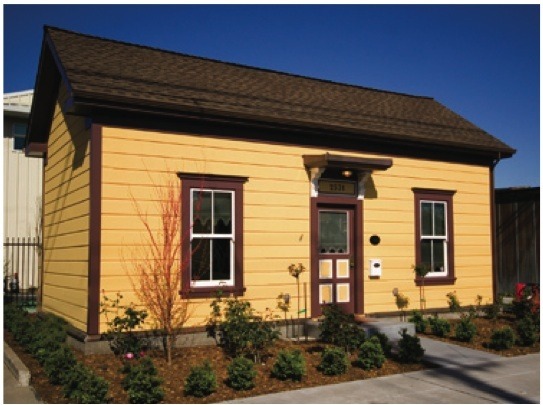 In January 2008, John Buestad & Ken Carvalho acquired the property with the intent of building their new construction office, shop & yard. The building that sat on the property was originally built in 1874 for N. H. Maybee; its builder and architect are unknown.

Buestad Construction’s original plan was to donate the building to the City of Alameda Recreation and Parks Department for the new Krusi Park office. However, the drawn out time frame of the approval process made this plan unrealistic. They then worked diligently with their architect, Norman Sanchez, and Simone Wolter and Jon Biggs of Alameda’s Planning Department to come up with a way to preserve only the original 14’ x 28’ structure and to remove all of the non-original and unpermitted additions. They also worked out a plan to relocate the house to the front of the lot in order to align it with the set back typical of the other Victorian homes on the block. This permitted the space needed to construct the new Buestad Construction Office and the required parking spaces in the rear of the site. 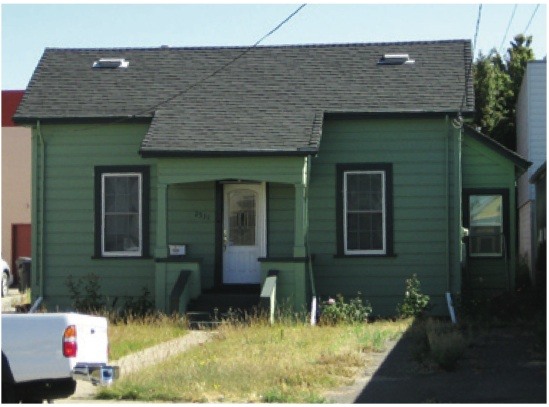 After a number of revisions to the site plan, an agreeable plan was put forth to the Historic Advisory Board (HAB) and it was unanimously approved at their February 2008 meeting. A Major Design Review Application was then submitted to the Planning Board and in their March 2008 meeting the item was heard. Some neighbors expressed concern about the presumed use for the house, but it was pointed out by the Planning Board that even though it looked like a home, it had been used as an office for the prior 10 years and a residence was not permissible under the City’s General Plan and Zoning Ordinance. Hence, the project was once again unanimously approved.

After a number of issues were resolved regarding the soil conditions on the site and the rear building’s foundation, in May a complete set of plans were submitted to the City for approval. The plans incorporated the original door and window casing details as well as picture mold, chair rail, and wooden floors (note the original 1”x 4” Douglas Fir Tongue & Groove flooring was too badly damaged over the years to be saved and thus a new oak floor was installed over the top of it).

The Alameda Architectural Preservation Society (AAPS) recommended the exterior double hung windows, with their two lite over two lite configuration, since this was the typical window design for buildings of this type in the early 1870s. Since the original porch and front door had been removed, comparable homes were used (the two Italianate cottages on the south side of Buena Vista Avenue next to the Alameda Market Place) as references.

On June 23rd the permits were issued and the first step was to bring in the big equipment to demolish the rear “non-original” additions. Once they were out of the way, Rogers House Movers cribbed up the house and rolled it forward approximately 30’ and moved it north approximately 7’. A new foundation was constructed to accommodate the building whose finish floor was only 6” above the exterior grade; all while the rear building was under construction. For cost reasons, the underground utilities lagged behind so that both buildings could be connected at the same time.

After waiting 18 weeks for PG & E and EBMUD and waiting for permission from Burlington Northern Santa Fe to dig under the abandoned railroad tracks in the street, the Maybee Building had its own gas, water, and sewer. Alameda Power & Telecom was “Johnny-on-the-spot” and connected the underground power. The building’s exterior colors were modeled after the Southern Pacific Railroad as it is rumored that in the 1920’s–1940’s the home was used as an office for the stationmaster. On January 14, 2009 the building was finished and Harding’s Landscape Maintenance became its newest tenant—so in 12 months the land was acquired, HAB approval was given, Planning Board approval was secured, City permits were issued and the construction was completed.

It just goes to show that if the owners are willing to spend the time and money, the Alameda city staff and boards are accommodating, and the sun and moon are slightly aligned, old structures like the Maybee Building can be saved, restored and reused.