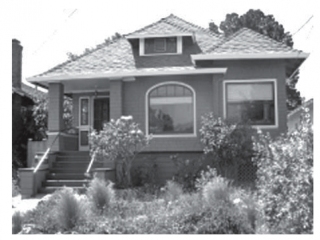 As you walk up to the Colonial Revival cottage built in 1907 by John Herman you are greeted by a little sign that says “Ladybug Habitat.” Right away you get the sense that the people who live here steer clear of toxins. Laura is a master gardener and Joe is a wildlife biologist. So why would they buy a house shrouded with asbestos shingles? Even though the house was a mess when they bought it in 1995, they somehow knew that it was a candidate for restoration. What had been done to the house was not right and it needed to feel right again, or, as Laura puts it “organic.”

The DiDonatos were not complete strangers to such an effort. They had recently helped some friends renovate a Craftsman home in Berkeley. 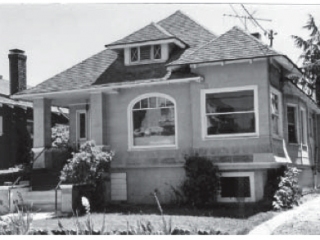 Even so, they had not tackled anything like this. They did have concerns about removing the asbestos. What dangers and risks might there be for themselves, their two young children and the neighbors? Since Laura was the one pushing to do it, she went about researching asbestos removal and concluded that they could do it themselves. Well, actually, SHE would be doing it. As a stay-at-home mom, she had the time to tackle the project.

Two years later, the deed was done. “You know, it always takes longer than you think.”

They were very pleased to find that the original wood shingles were for the most part in good shape. Removing the nails and patching all the holes was actually the most tedious part of the job. One unexpected discovery was the presence of a large honeybee nest that had been growing in a wall cavity. Rather than exterminate them, a beekeeper from Berkeley was called in to safely take them away.

Another major project undertaken was the kitchen remodel. Joe says, “Laura is the motivator. I tell her to design it and make me a list.” The result is a beautiful, very natural feeling space that is so pleasant to work in and blends perfectly in an old house. Bricks removed from an almost crumbling chimney were recycled into a patio.

Was it worth the effort? They said yes. Although it was at times very frustrating, it was also rewarding. As Laura spent her days outside on a ladder, neighbors were watching and admiring. She proudly exclaims: “the neighbors were thrilled!” She goes on to say they are hopeful that they might inspire others to do the same.