Alameda has been home to shipbuilding for more than 150 years. Once home to half a dozen major shipyards, some capable of building complete ocean liners, Alameda now has only one yard left able to work on major ships. This firm, Bay Ship & Yacht, is exceptional in that it has the capacity to repair steel ships, as well as repair and even reconstruct wooden ships.

The 1895 three-mast wooden-lumber schooner C A THAYER has been a fixture at San Francisco’s Hyde St. Pier since 1957, when she was sailed down the coast to her new home using only the wind and the stars to steer her by. However, rot, 50 years of exposure to the Bay elements, and National Park Service financial problems have all taken a toll. Many believed she would have to be scrapped, because likely, she could not be saved. In a decision that surprised many and pleased all, the National Park Service decided to save her. The C A THAYER’s rebirth would represent a wooden ship reconstruction project whose sheer magnitude had not been attempted in this country since the Frigate USS CONSTITUTION had been totally rebuilt in 1929.

The next questions to be answered were: Was there any lumber left in the huge sizes required, and were there any shipwrights left with the necessary skills to save her? Both answers happened to be right here in Alameda. Over many years, Bay Ship & Yacht had done maintenance and preservation work on the ships in the San Francisco Maritime National Historical Park. The National Park Service had confidence in the firm’s skills and their ability to do the work and in 2004, issued a contract to Bay Ship & Yacht for the reconstruction.

A project of this magnitude could not be done outdoors, so Bay Ship & Yacht had to identify a building large enough to house the 160-ft long ship, store the thousands of board feet of lumber required, and an ancillary shop for the huge woodworking tools required for the job. The nine hangars at Alameda Point looked very promising. The Naval Air Rework Facility Building 400 was chosen as the C A THAYER’s reconstruction site. 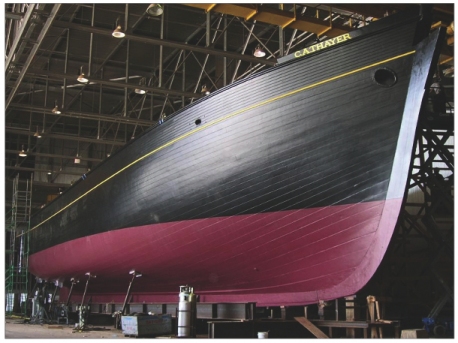 In 2004, the C A THAYER was towed from San Francisco to Alameda. The 458- ton ship was placed upon a steel cradle and very gingerly towed to Bldg. 400, where work on her would continue for the next three years. Over 100,000 man- hours were expended in replacing nearly 85% of her structure, using 375,000 board feet of lumber in the process. At the end of March 2007, the C A THAYER was completed, and moved from Bldg. 400 back to the shipyard. On March 31st, 2007, she was launched back into the waters of the Bay.

Building 400 started life as a hangar where thousands of aircraft were reconstructed for the Navy. Its gigantic column-free space enabled it to serve as an indoor ship repair shop. Bay Ship & Yacht, plans to continue using Bldg. 400 for indoor ship repair work. The diverse collection of buildings at Alameda Point offers adaptive reuse opportunities limited only by the imagination. The $14 mil- lion three-year reconstruction of a 112-year old lumber schooner is only one.