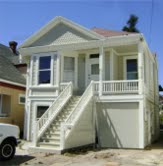 The residential property at 323 Lincoln has been in the Louie family for two generations.  Built in 1891, in the Queen Anne cottage style, the building, according to historic records, was owned originally by one Andrew Abrahamson.

The current building representative and construction contractor, Benny Louie, was in fact born in the building. Over the years the structure had been added onto at the rear to accommodate the growing family. The original building remained intact, however, it began to fall into disrepair when the family moved out. In 2009 the City of Alameda Building Department’s Code Enforcement official, Michael Meyer, began working with Mr. Louie to improve the public face of the building and so repairs began on the exterior of the structure.

Building permits were secured in December of 2009 and work was completed in March of 2010.  Renovation improvements comprised the following:

•  Damaged wood windows were reconstituted to match the profile and style of the originals with new glazing installed.

•  The aluminum gable window was removed and replaced with shingle siding to match the original material.

•  Front porch repair work was done to compliment the historic style of the house.

•  The entrance stair was completely overhauled and brought back to a look consistent with the historic character of the building.

•  Portions of the foundation were replaced and a new roof installed.

•  Trims, and details were restored and provided with paint work.

•  The original V Rustic Groove siding was removed in damaged areas and replaced to match the profile and style of the original material. 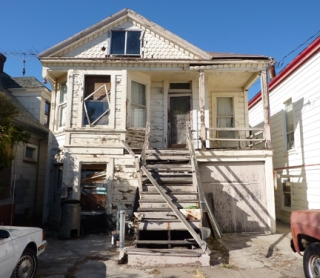 Overall it is a dramatic improvement and took approximately two months to achieve. Michael Meyer, after reviewing the finished product, stated that he was very pleased with the results and glad to be a part of the project. It is Mr. Louie’s intention to continue work on the building by improving the condition of the rear renovation and remodeling the interior of the home so it can once again be occupied. Additionally, the Louie family portfolio includes several other buildings on the street, and Alameda in general, and there are plans to make restoration moves on those structures as well in the near future.

The committee would like to thank Benny for his time producing the background information on the building and also thank Michael Meyer for his work on this project and supplying photographs of the building.